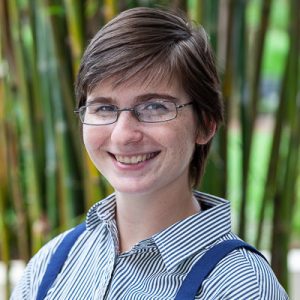 Victoria is from Bowie, Maryland and has a B.S. in Biology and Environmental Studies from St. Mary’s College of Maryland. She researches methods to mitigate harmful algalblooms of Karenia brevis, also known as Florida red tide. Currently she is studying the ecological impacts of clay as a potential bloom control treatment. She aims to pursue a career in marine ecology and work towards solving global environmental issues.

Clay as a Bloom Control Treatment

Dispersal – Clay is mixed with seawater and sprayed over a bloom affected area.

Flocculation – The electrical attraction between the positively-charged clay and the negatively-charged algae cells creates clumps (or flocs). Cells are ruptured or carried away by the flocs.

Settlement – The flocs sink to the bottom of the water column, where algae cells die and decompose.

Harmful algal blooms (HABs) of the toxic dinoflagellate Karenia brevis occur almost annually in the Gulf of Mexico and are an ongoing threat to our marine ecosystems. The mechanisms that initiate and sustain these HABs are complex and have both natural and anthropogenic drivers. K. brevis blooms produce massive amounts of neurotoxins (brevetoxins) and can induce hypoxia, inflicting mass mortalities in fish and other marine animals, including sea turtles, manatees, dolphins, and seabirds. Humans can be affected through ingestion of contaminated seafood and inhalation of airborne brevetoxins. As a result, K. brevis HABs have far-reaching impacts in the local economy, including declines of fish stocks, disruption of tourism and recreational activities, seafood market closures, beach cleanups, and costs of medical treatment.
At this time, the most advanced, scalable, and widely used marine HAB control strategy is the use of clay, which has been studied and used as a bloom control for over 20 years in China and South Korea. In this process, a clay-seawater solution is sprayed over the bloom, leading to flocculation (aggregation) of the clay and algae cells. The flocs settle to the bottom sediments, where trapped algae cells eventually die and decompose. The use of clay presents many benefits, such as high availability, low cost, and short reaction time, and a growing body of evidence shows clay alone is non-toxic to many organisms at typical treatment concentrations
There are still many questions to be addressed before clay can be considered for widespread treatment of K. brevis blooms in Florida. Since clay flocculation concentrates cells and toxins on the bottom of the water column, impacts on organisms living at or near the bottom are of particular concern. To ensure “the cure is not worse than the disease”, we evaluate the impacts of clay flocculation with K. brevis on a variety of marine organisms in aquaria and in the field.