The Empire Strikes Back: Violence and Counterinsurgency in the North Caucasus 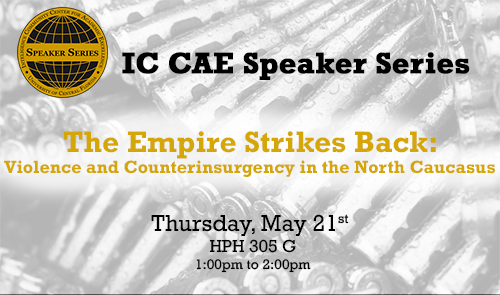 Join us for David Siroky’s two-part talk on how governments employ violence in counterinsurgency. Dr. Siroky is an Assistant Professor of Political Science in the School of Politics and Global Studies at Arizona State University where he is a core faculty member of the Center for Social Dynamics and Complexity and a faculty affiliate of the Center for the Study of Religion and Conflict, the Melikian Center for Russian, Eurasian and East European Studies and the Center on the Future of War.

Part 1: The Empire Strikes Back: Ethnicity, Terrain and Indiscriminate Violence in Counterinsurgencies

This article investigates the conditions that influence the government’s ability to obtain intelligence in counterinsurgencies. Specifically, it suggests that the government is more likely to use indiscriminate violence in areas characterized by indigenous ethnic homogeneity and forested terrain. The results indicate that ethnically homogeneous and forested areas are significantly more likely targets of indiscriminate violence, and that the effect of ethnicity is markedly stronger when the district is densely forested.

Part 2: The Logic of Killing Kin in Irregular War: How and Why Does It Work?

This article explores the use of lethal violence – and the threat of violence – against insurgents’ relatives as a counterinsurgency strategy. The article argues that killing kin, a heavily understudied counterinsurgency strategy has the advantages of selective violence, without the same information requirements, while potentially avoiding some of the disadvantages of indiscriminate violence. The article advances an explanation for why governments would adopt this counterinsurgency approach, and discusses the conditions under which it is likely to prove effective.