They all fall down: Economic insecurity, general strikes, and threats to political stability during austerity in Southern Europe 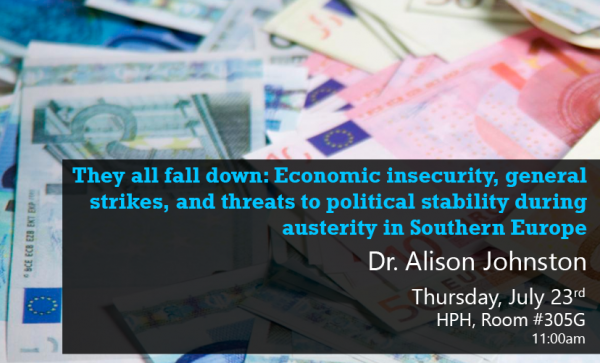 Join us as Dr. Alison Johnston speaks about economic insecurity, general strikes, and threats to political stability during austerity in Southern Europe. She is currently an assistant professor at Oregon State University and earned her PhD in European Political Economy from the London School of Economics and Political Science.

The European Debt Crisis, and the European Union’s austerity politick that followed in its wake, have placed significant strain on governments in the EU’s peripheral member-states. To fulfill conditions of EU fiscal assistance, governments have unilaterally pursued severe austerity reforms.  In response to the lack of democratic debate on austerity, unions have staged general strikes in order to voice protest against these spending cuts and tax increases. However, Southern European governments have largely ignored these grievances and pushed on with austerity. Though these strikes appear to have no direct political effect on governments, we examine whether they have indirect, de-stabilizing political effects by impacting government turnover.  We find that while governments across the EU15 have suffered greater political instability since the 2008 financial crisis, governments in Southern Europe have been particularly hit hard.  We argue that one reason behind heightened political instability in the South is due to the high incidence of general strikes, which increase the visibility and political explosiveness of austerity reforms.

This event is co-sponsored by the School of Politics, Security, and International Affairs.