Topics in Cyber Security and the Internet 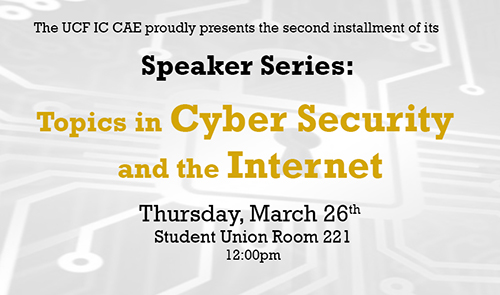 On March 26th UCF’s Intelligence Community Center for Academic Excellence hosted the second installment of its Speaker Series, this one entitled:  “Topics in Cyber Security and the Internet.” The event featured four speakers who represented different aspects of the effects of cyber security and the internet on the public and private sectors. The speakers were: Dr. Patrick Lam – Visiting Fellow at the Institute for Quantitative Social Sciences at Harvard University, Lewis Shepherd – Former Director of the Microsoft Institute for Advanced Technology in Governments, Andrew Lenzen – Special Agent at the FBI Orlando Office, and Tim Murphy – VP of Corporate Compliance for MacAndrews and Forbes Holdings, Inc., and Former Deputy Director of the FBI.

Dr. Lam spoke about his work using social media text analysis and its possible applications for national security. In one of the examples he demonstrated how his team could predict crowd behavior in an event like the Egyptian coup d’état. They did this by analyzing over 300,000 web sources (Twitter, blogs, etc.) in seven different languages.

Lewis Shepherd presented “The Internet, 2015-2025: Business and Policy Challenges for the Private Sector.” He began by arguing that the intelligence community in the U.S. is woefully behind on technology and cyber threats in today’s world.  He also talked about the importance of globalization in private sector internet interests today, and about the role of technology and emerging cyber threats in the global marketplace.

Andrew Lenzen’s presentation, “An Overview of Cyberterrorism,” described the FBI’s program Infragard, which attempts to connect the FBI with private businesses in order to confront cyber security issues and collaborate together to create viable solutions. He also spoke on the phenomenon of groups like ISIS and Al-Shabaab using social media for recruitment purposes.

A common theme of the event was that the government is behind on creating internet and cyber security policy to keep itself secure against incoming threats. New avenues for cooperation and collaboration need to be created in order to adequately prepare for cyber security threats, which Tim Murphy called “the most significant threat the country faces.”

UCF’s Intelligence Community Center for Academic Excellence will present the Topics in Cyber Security and the Internet Colloquium on Thursday, March 26th. The colloquium will discuss the current issues of cyber security and the internet’s effect on the public and private spheres.

Visiting fellow at Institute for Quantitative Social Sciences at Harvard University will speak on social media text analysis and applications for national security.

Former Director of the Microsoft Institute for Advanced Technology in Governments will present “The Internet, 2015-2025: Business and Policy Challenges for the Private Sector”.

FBI Special Agent at the FBI Orlando Office will present “An Overview of Cyberterrorism”.

Former Deputy Director of the FBI, currently VP of Corporate Compliance for MacAndrews and Forbes Holdings, Inc. will speak on current cyber threats and policy issues in the government and private sector.

This event is co-sponsored by the Computer Science Department, the Modeling and Simulation Graduate Program, and UCF’s Collegiate Cyber Defense Club.