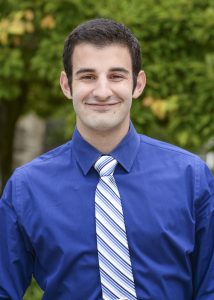 David is a doctoral candidate in his fifth year of the the Clinical Psychology Ph.D. program at the University of Central Florida. He completed his Bachelor’s degree in psychology with a concentration in cognitive neuroscience at Cedarville University in 2013. After graduating, he managed the Ofen Lab for Cognitive and Brain Development, which is located in the Institute of Gerontology at Wayne State University in Detroit. His time working in the Ofen Lab led him to formulate an interest in memory function, traumatic brain injuries, and neurodegenerative disorders across the lifespan. He then earned his Master’s degree in Clinical Psychology from UCF in 2018. His work includes examining neurological, cognitive, and biological mechanisms of depression among older adults. In the near future he plans to complete an internship and two-year postdoctoral fellowship in neuropsychology.