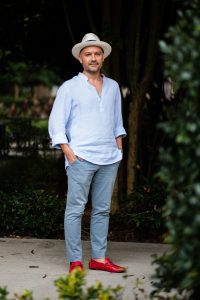 Tezcür studies political violence, politics of identity and democratization, with a focus on Iranian, Kurdish, and Turkish human geography. He has published more than two dozen scholarly articles in journals including American Political Science Review, Comparative Politics, Development and Change, Journal of Peace Research, Perspectives on Politics, among others.

He is currently working on an NSF-funded research project titled “Diversity in Linked Fate: Political Behavior and Opinions of Latinx Americans” in collaboration with Assistant Professor Kenicia Wright, Ph.D.

College of Sciences sat with Dr. Tezcür to discuss his path up to this position and his vision for the new role.

How did you join the UCF community?

I came to the United States 21 years ago from Turkey, and received my Ph.D. from the University of Michigan. I joined the faculty at UCF in 2015 to establish the Kurdish Political Studies Program, one of the only such programs in the U.S. We offer a scholarly perspective on minority rights and democratic struggles such as the Kurdish Question.

What is the Kurdish Question?

The Kurdish Question goes back to the 20th century when the Ottoman Empire was dismantled, and it’s essentially “Under what conditions could the Kurdish people live in a peaceful, secure and democratic environment?”

Growing up in Turkey, the Kurdish Question had a formative influence over my generation. There was a civil war and many people were dying with no resolution in the horizon. When I became a scholar, I managed to look at this question from a distinct perspective. I visited Kurdish regions and collected extensive data to study the Kurdish Question with the help of social science tools.

Why did you choose UCF to further pursue your line of work? What appeals to you about UCF?

What I really like about UCF is the student body; it epitomizes American diversity. People usually comment first about its large size, but I see this as an advantage because it gives you the opportunity to collaborate with different people. You have people from very different backgrounds coming here, which offers you a fresh perspective on their life and it stimulates intellectual activity and scholarly research.

What are some short or long term goals you have for the school?

I would like to develop further the Ph.D. program that was established nine years ago. I would also like to enable greater engagement between our faculty and undergraduate students.  Another thing would be to provide niche projects for our centers such as the India Center and the Intelligence Community Center for Academic Excellence. Developing their strengths and improving coordination between the centers is one of my priorities.