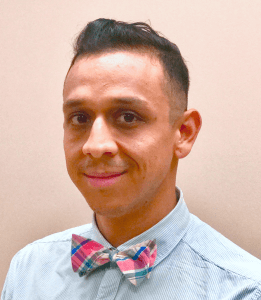 He did his undergraduate studies at Instituto Tecnológico y de Estudios Superiores de Monterrey (a.k.a Monterrey Tech), where he earned his LCQ degree (Licenciado en Ciencias Químicas) in 2006. During his time at Monterrey Tech, he experienced undergraduate research with Prof. Marcelo Videa, and  was also an international exchange student at University of Michigan Ann Arbor where he worked under the supervision of Profs.  Adam J. Matzger and Omar M. Yaghi.  He then moved closer to home to study graduate school at University of California Los Angeles, where he received a PhD in inorganic chemistry, under the supervision of Prof. Omar M. Yaghi, specializing in synthesis and powder diffraction crystallography of covalent-organic frameworks. He then was a visiting scholar at Newcastle University in the United Kingdom where he studied the crystallization of polyoxometallates with Profs. Walter Klemperer and John Errington. He later became a postdoctoral associate at Cornell University in the research lab of Prof. William Dichtel. There, his research focused on developing synthetic strategies for the preparation of graphene nano ribbons for their potential application in molecular electronics.

Fernando became an Assistant Professor in the Chemistry Department at the University of Central Florida in the Fall 2013. His research interests are focused on new applications for metal-organic frameworks with complex properties.