The Marine Turtle Research Group (MTRG) has conducted research on the Archie Carr National Wildlife Refuge (ACNWR), adjacent beaches, and in coastal and inland waters for almost 40 years. Data collected by this program were instrumental in establishing the ACNWR in 1991 and a formal partnership agreement was established with the US Fish and Wildlife Service in 2016. The refuge and nearby coastal habitats support the largest loggerhead sea turtle rookery in the Western Hemisphere and among the most important green turtle nesting habitat in North America. We provide valuable nesting beach data to state, federal, and local agencies and provide insight to impacts of shoreline erosion on Florida’s sea turtles. 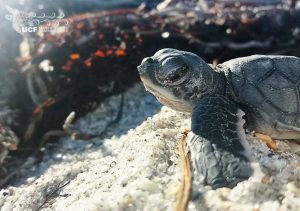 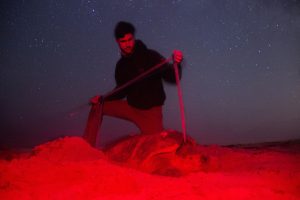 Our permanent field sites are located on the coast, over 70 miles from the Orlando UCF campus. The MTRG houses one of the longest and largest sea turtle datasets in the world. This dataset is essential to international, federal, and state managers tasked with the protection and recovery of the endangered and threatened sea turtle populations—including populations utilizing central Florida’s terrestrial and marine habitats.

We monitor up to 47.5 km (~30 miles) of coastline along the Central Florida coast from Sebastian Inlet (near Melbourne Beach) to Patrick Air Force Base, including the Archie Carr NWR. We maintain a ~40 year dataset of sea turtle nesting and reproductive assessments (nighttime and daytime research) for this stretch of coastline. For over 40 years, we have also conducted in-water surveys of juvenile sea turtles that are found foraging in the Indian River Lagoon, an important developmental habitat for loggerhead and green turtles. The MTRG monitors the health of sea turtle juveniles found in the Indian River Lagoon with projects examining disease ecology, sea turtle diet, and impacts of harmful algal blooms. 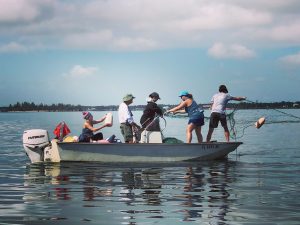 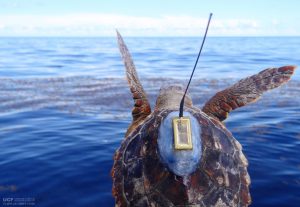 We also conduct offshore in-water work in the Northern Gulf of Mexico in order to satellite track very small, oceanic stage sea turtles captured in the region associated with the BP oil spill. This is an on-going project that provides the world’s first in situ tracking data on wild-caught oceanic (“lost years”) juvenile turtles. With Dr. Mansfield’s novel research satellite tracking the sea turtle “lost years” the MTRG is evolving into a center for whole life history sea turtle research—from eggs to adulthood.

Sea turtles are highly migratory marine animals and sea turtle conservation is a global issue. The MTRG participates in a number of global initiatives to better understand early sea turtle behavior and dispersal during their “lost years” offshore. The MTRG maintains international scientific partnerships with Projecto TAMAR in Brazil and is a Collaborative Partner with the Sargasso Sea Commission.