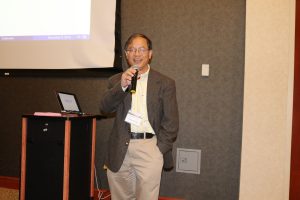 Jiongmin Yong obtained his BS degree from Fudan University (China) in 1982, and obtained his PhD degree from Purdue University (USA), in 1986, under the supervision of Professor Leonard D. Berkovitz. After spending a short time at University of Texas, Austin (1986—1987), he became an associate professor at the Department of Mathematics, Fudan University in 1988. In the following 15 years, he was working at Fudan University, promoted to a full professor in 1991, became a (Chinese Education Ministry named) “Cheung Kong” professor in 2000, and was the Chair of the department during 2000—2003. In 2003 he moved to Orlando, and since then he has been a full professor at UCF.

Jiongmin Yong’s research interests include: Optimal control theory for finite-dimensional and infinite-dimensional deterministic and stochastic systems, differential games, stochastic differential and integral equations, mathematical finance. So far, he has published 9 books, and over 150 papers. He was the winner of 2011 SIAG/CST Best SICON paper prize (joint with M.-H. Chang and T. Pang). He has delivered a 45-minute invited talk at the International Congress of Mathematicians (ICM) in 2014.