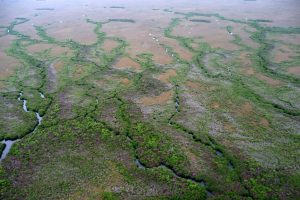 Mangroves expanding along tidal creeks with saltwater intrusion in the Everglades.

Sea level rise threatens the livelihoods of millions of people worldwide, but also poses ecological risks for vast areas of coastal marshes and mangroves that serve many important functions: wildlife habitat, hotspots for biodiversity, nutrient cycling, and protecting the shoreline from erosion and storm surges. The ability to trap and store carbon in plant biomass and in the soil is another value of coastal wetlands that allows them to accrete vertically to “keep pace” with sea level rise, as well as provides a natural means of sequestering carbon from the atmosphere. 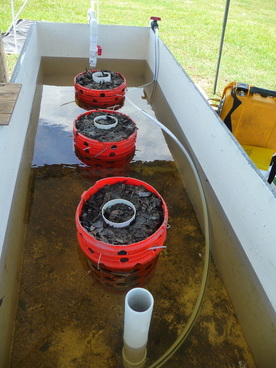 The objective of this research is to understand how increased salinity and inundation that accompanies sea level rise will affect the ability of coastal wetlands to continue to function as soil carbon reservoirs by studying the activity of billions of microorganisms that live in the soil and regulate the carbon cycle. Soil microbes break-down (decompose) organic matter as a food source and subsequently re-release that carbon back to the atmosphere as carbon dioxide (CO2) and methane (CH4) gas.  We want to know: how will this process of carbon cycling be affected by sea level rise, and will coastal wetlands be able to persist during rising sea levels (or will they submerge)? If they do submerge, what happens to the vast carbon  and nutrient pools that were previously stored in the wetland soils?

Finally, we also investigating the impacts of saltwater intrusion on nitrogen and phosphorus cycling in coastal soils to determine if there may be a change in the export of these critical nutrients into the coastal zone.  Nitrogen and phosphorus often function as limiting/co-limiting nutrients for phytoplankton production in coastal ecosystems; increased their availability due to accelerated soil mineralization rates or leaching in coastal wetland soils would have important implications for the ecology of the coastal zone and may contribute to harmful algal blooms and eutrophication.