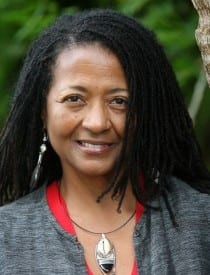 Professor Rosalyn Howard was an Associate Professor of Anthropology at the University of Central Florida (UCF). She specializes in Cultural Anthropology and her primary area of research is ethnohistorical studies of the African Diaspora with a focus on the interrelationships formed by African and Indigenous peoples in the Americas and the Caribbean. Dr. Howard has conducted extensive research among mixed Native-African populations in The Bahamas and Bermuda. Among her publications is the book entitled Black Seminoles in the Bahamas, an ethnographic study of the Black Seminole descendant community of Red Bays, Andros Island, Bahamas.

Dr. Howard is also a member of a public anthropology research project entitled “Looking for Angola” currently compiling archaeological, cultural, and archival evidence of an early 19th century Florida maroon community, formerly located near present-day Sarasota, Florida, which has a direct connection to Red Bays (www.lookingforangola.org). Prof. Howard is also a consultant to the Cultural Heritage tourism project (co-sponsored by the State of Florida and The Bahamas Ministries of Culture and Tourism) that connects the Red Bays community to the Gullah corridor of South Carolina and Georgia, and Fort Mose near St. Augustine, Florida.

Dr. Howard’s interest in exploring state-of-the-art pedagogy led to her participation in a distance education project exploring the peoples and cultures of South Africa and Swaziland in 2010. During summer 2011, Prof. Howard participated in a Fulbright-Hays grant project exploring cultural, educational and democractic issues in Botswana.

Her primary focus of research is studies of the peoples of the African Diaspora with an emphasis on the Caribbean region. Her topical interests include: Race, Culturally Responsive Pedagogy, Ethnohistory, Oral History, Cultural Identity, and the interrelationships of African and Indigenous peoples in the Americas and the Caribbean. Dr. Howard’s research on the latter topic includes the historical and present-day relationships of Seminole Indians and Africans who became known as Black Seminoles in Florida and The Bahamas.Among her publications is the book entitled Black Seminoles in the Bahamas, which is based upon research that she conducted while living in the community of Red Bays, Andros Island, Bahamas for one year. Other recent publications include, The “Wild Indians” of Andros Island: Black Seminole Legacy in The Bahamas (Journal of Black Studies), Social Capital, Health and HIV Awareness of Girls in a Rural Caribbean Community (International Electronic Journal of Health Education), Culturally Responsive Co-Teaching, and Learning in Higher Education: The Nexus of Education and Anthropology (Multicultural Perspectives), and Looking For Angola: An Archaeological and Ethnohistorical Search for a Nineteenth Century Florida Maroon Community and its Caribbean Connections. Transforming Anthropology). Dr. Howard is a member of an interdisciplinary team for the “Looking for Angola” project (website: www.lookingforangola.com) that concerns a 19th Century Florida maroon community that has direct connections to her research community in the Bahamas.

Please visit the News section for Dr. Howard to find the latest information on her accomplishments.

Congratulations to Dr. Rosalyn Howard as PI for a University of South Florida grant, The US-Bahamian Underground Railroad Connection.

Congratulations to Dr. Rosalyn Howard for being selected to participate in an International Team Teaching Project. Interactive Expeditions South Africa: A Cultural Transect involved using technology to provide interactive online teaching to 57 students in a course at UCF.