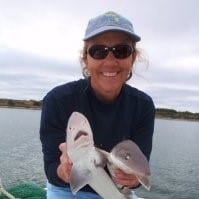 Dr. Karen Holloway-Adkins graduated from Florida Atlantic University with a Doctoral degree in Integrative Biology where her research focused on the impact of marine herbivores, including green turtles, on macroalgal communities. Her scientific interests focus on the central realm of functional marine ecosystems, specifically on the effects of foraging on aquatic vegetation, consumer-prey relationships among herbivores, resource competition vs. partitioning, and macroalgae identification.

She works as a scientist in NASA’s Ecological Program, studying and monitoring the status of threatened and endangered species at Kennedy Space Center, Florida.

Dr. Holloway-Adkins is also a University of Central Florida alumna and graduated with a Bachelor’s and Master’s degree in Biology. UCF is a very dear place for Dr. Adkins because it was during her undergraduate that she became involved in student research projects, including becoming a member of the UCF Marine Turtle Research Group. Little did she know that years later she would be able to transfer that experience of working on the largest marine turtle nesting beach in the Western Hemisphere to her current work concerning the effects of lighting on sea turtles on the nesting beach at Kennedy Space Center.

In addition to her work at NASA, Dr. Holloway-Adkins is a primary investigator for a not-for-profit organization whose main goal is to foster education through scientific research. Several studies have focused on the distribution and movement patterns of juvenile green turtle populations, describing and characterizing marine habitats, and investigating the biological impacts of beach nourishment projects.