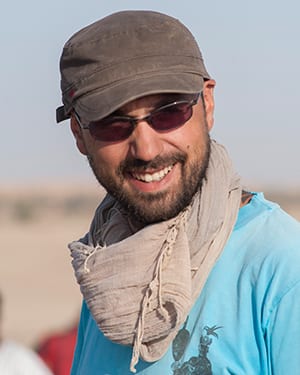 Dr. Marc Maillot received his Ph.D. from Sorbonne University in 2013, and is now an associate member of the UMR 8167 “Orient et Méditerranée” (French National Research Center-CNRS). Before his appointment as a Courtesy Assistant Professor at UCF in 2015, Dr. Maillot conducted seminars on late antiquity urbanism and architecture at Paris-Sorbonne University, and Shendi University in Sudan. His research interests include vernacular architecture both in Egypt and Sudan, Meroitic iconography, Social Anthropology, and urbanism in antiquity. Dr. Maillot has worked on archaeological sites abroad since 2007, with a special focus on the Middle Nile Valley, on sites such as Muweis, el-Hassa, and Sai Island. His field experience also includes the archaeology of Roman settlements in France, particularly on the shores of the Marne River. His past research has been focused on technical approaches to the study of cultural transmission, and more specifically on the theme of casemate foundations for monumental brick structures along the Nile. Dr. Maillot’s current research focuses on the Osirian cult practice in the Meroitic royal pageantry, architectural representation in the iconography of the Middle Nile Valley, and late antiquity Sudanese towns as production machines for a centralized power based at Meroe.