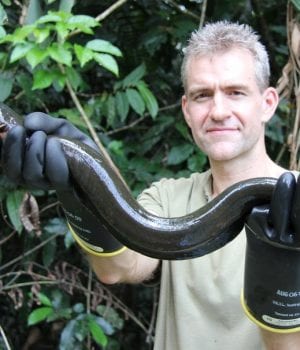 Dr. Crampton’s research program investigates the ecological, behavioral, and evolutionary mechanisms that generate and regulate species diversity. With more than 6,000 species, Neotropical freshwater fishes represent the richest vertebrate fauna on earth (c. 10% of all vertebrates). The Crampton lab is interested in how this diversity is generated and maintained, how resilient it is to human pressure, and how it can be protected. To approach these questions the lab uses, as a model group, the gymnotiform electric knifefishes. These remarkable fishes generate stereotyped, species-specific electric communication signals that provide an unparalleled opportunity to understand the mechanisms of diversification. The lab is currently focusing on reproductive isolating mechanisms in pulse-generating gymnotiforms, and on a taxonomic revision of the families Gymnotidae and Hypopomidae. Dr. Crampton and his collaborators are also undertaking a long term program of freshwater fish biodiversity inventories in the Amazon basin.

University of Central Florida biologist Will Crampton, an internationally recognized expert in electric eels and other electric fishes, co-stars in an episode full of excitement of “Dangerous Encounters,” a documentary series on the National Geographic Channel. Crampton offers his expertise about these amazing creatures – and is shocked by one of the eels — as television host Brady Barr films the trek deep into the Amazonian forests of Suriname, on the northern coast of South America.

“Dangerous Encounters” follows Barr as he travels around the globe to study reptiles and other creatures in their native habitats. The “Giant Eel” episode airs at 9 p.m. on Friday, Nov. 19.

12 September 2010. Will Crampton’s film about electric eels will be aired for the first time on the US National Geographic Television channel (it has already been released in Europe and South America) on November 19 2010

“In this episode of Dangerous Encounters, Dr. Brady Barr travels to the heart of the Central Suriname Nature Preserve with Dr. William Crampton of University of Central Florida in search of an incredibly dangerous fish, the electric eel. Upon arrival to the reserve, Brady observes that the water levels of the Coppename River are extremely high making the finding of this creature a much more difficult task. Eventually after some intense searching, Brady finds his first eel and his capture results begin to improve. Assisted by Will Crampton and the local Maroon community, Brady learns about electroreception in these fishes and the habitat that they live in. Along the way Brady will encounter venomous snakes and swarming piranhas, and the rare Suriname Toad.”

9 September 2010. A paper that Dr William Crampton co-authored recently in The American Naturalist was covered in a News and Views article in today’s edition of Nature. The paper in American Naturalist is entitled “Sexual signal evolution outpaces ecological divergence during electric fish species radiation” and was lead by Matt Arnegard, a post-doc at Dolph Schluter’s lab at the University of British Colombia. This collaboration was somewhat of a departure from Crampton’s usual research in that it involves African mormyriform electric fishes, not the Neotropical gymnotiform electric fishes. Crampton’s main contribution to the paper was to design a wavelet-based procedure for multivariate signal analysis. Justin Davis, a PhD student from the UCF Mathematics Department, worked closely with Crampton on this contribution and is also a co-author on the paper. 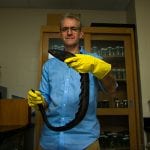 A UCF biologist is attracting global attention for recording the highest-ever voltage generated by an electric eel — or any living creature, for that matter.… ORLANDO, Nov. 4, 2015 — UCF zoologist William Crampton, Ph.D., braves the Amazon River to uncover the secrets of electric fish as part of a… 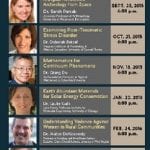 The College of Sciences at the University of Central Florida presents its 2nd annual Distinguished Speaker Series. The series brings renowned speakers from across the country…