The Sharanowski lab gave tours of to undergraduates in  EXCEL/COMPASS programs.

A Model Study Showing the Benefits of Systematics in Biocontrol

Utilizing Native Pest as a Renewable Source of Poultry Feed 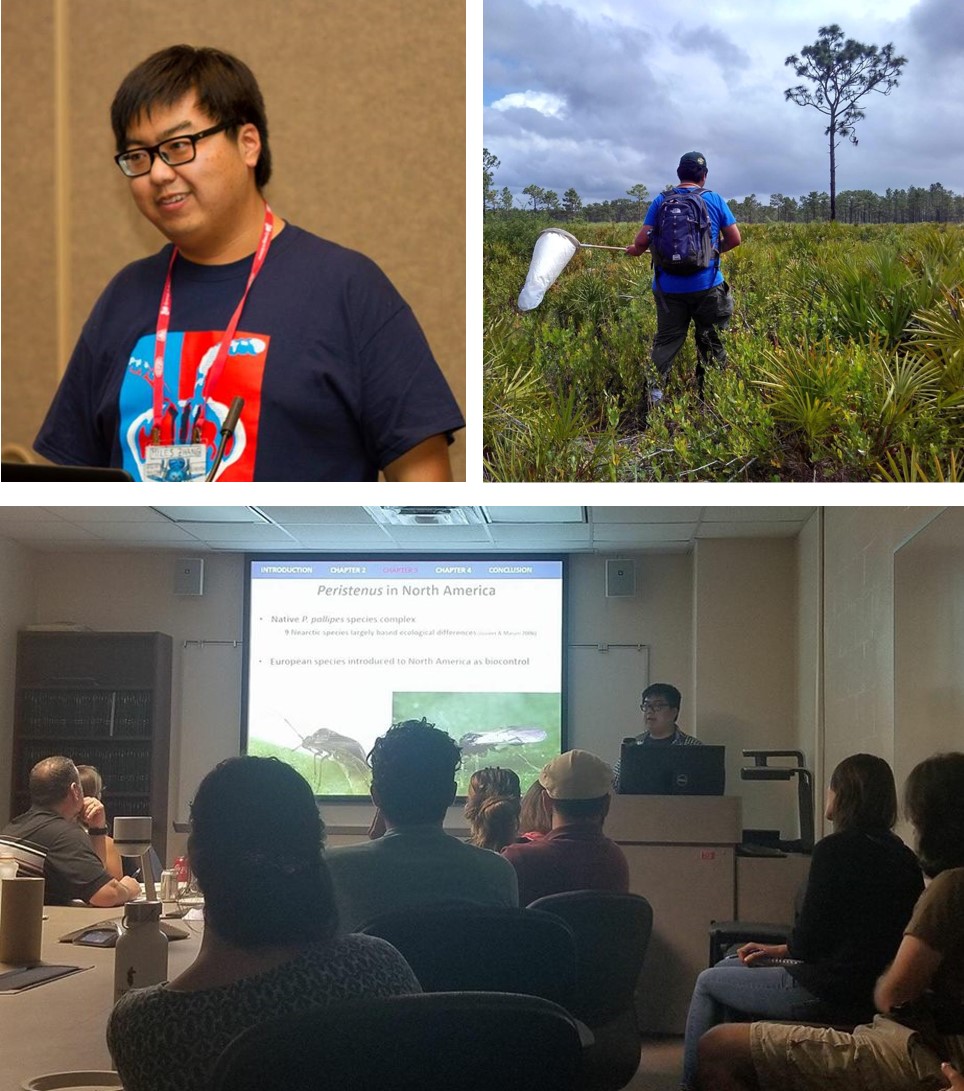 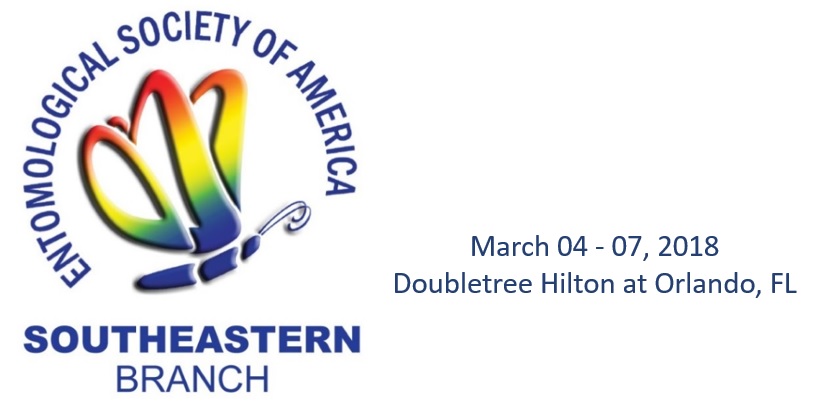 M.S in Natural Sciences at University of
Padua (Italy)

B.S in ‘Sciences and Technologies in Nature’ at University of Pavia (Italy) with a concentration in Evolutionary processes

My fascination for parasitic wasps of the superfamily Ichneumunoidea started during my master’s program at the Univesity of Padua (Italy), where my thesis focused on the subfamilies of Ichneumonidae as potential bioindicators. Although the topic of my research falls under ecology, my main interest has always been systematics and evolution of these outstanding creatures. This led me to collaborate with the Natural History Museum of Venice as an assistant curator for several years, where I was in charge of the Hymenoptera section, and give me the chance to work on the Ichneumonidae collection at the Zoological Museum of Copenhagen during a visit as a visiting student. I pretty excited to start my PhD project at the UCF stimulating environment, hoping to find my way through the big and changeling world of systematics of parasitoid wasps.

Poultry farming produces significant amounts of waste by-products, particularly poultry litter, the used bedding on which chickens are reared. Full of excrement, this bedding must be removed from the coops and disposed. Although poultry litter has been used as a crop fertilizer, its use has been restricted in recent years due to contamination and eutrophication of water due to run-off. Thus novel uses or recycling of poultry litter will economically benefit farmers, particularly small poultry operations. Here we examine the utility of the Eastern subterranean termite (Reticulitermesflavipes) as a potential inexpensive and renewable recycler of dirty chicken bedding. Specifically, we test the survivorship of termites on clean and dirty poultry bedding and discuss the potential of termites as an on-farm, sustainable solution to poultry waste. 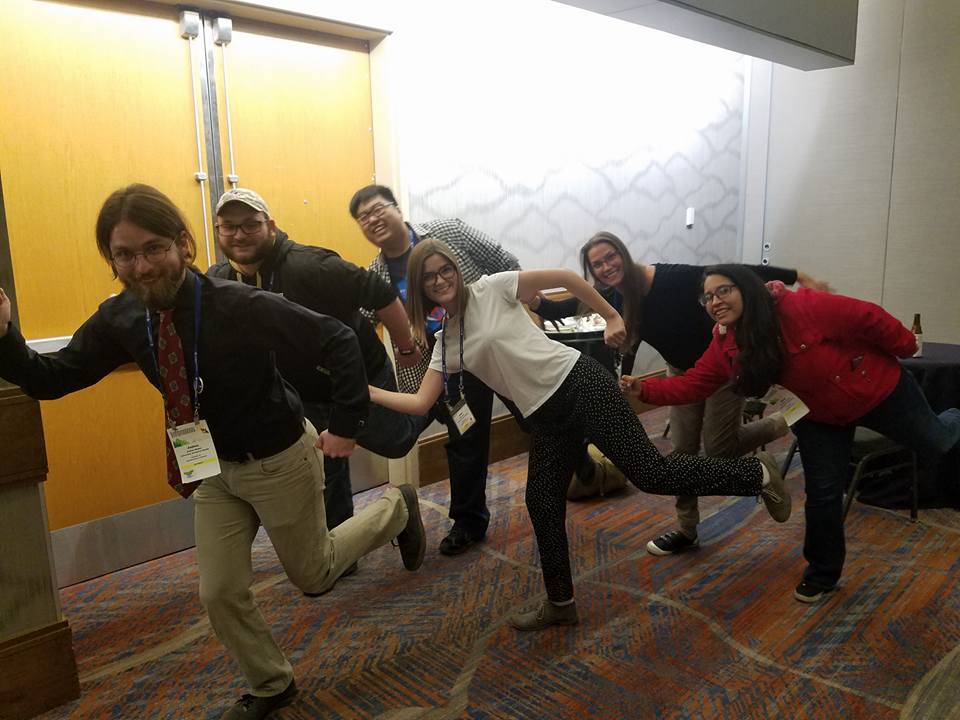 Our postdoc, Nash, presented at Ecology Society of America on August 10th, 2017!

Thursday, August 10, 2017: 10:50AM
D136, Oregon Convention Center
Nash E. Turley and Lars A. Brudvig, Michigan State University
Background/Question/MethodsHabitat restoration often involves adding seeds of native plant species but it is not well understood what ecological factors influence whether they establish. We studied how multiple plant consumers and habitat edge effects influence plant establishment in recently restored prairies. At Kellogg Biological Station in Western Michigan we applied herbicide to 12 old-field sites and sowed them with native prairie species. To test how edge effects and vertebrate consumers influence sown species establishment we constructed 48 exclosures out of hardware cloth each with a paired pseudoexclosure. Each site had two exclosures near the edge and two in the middle. To test the effects of insects and molluscs we established plots that got treatments of either insecticide, molluscicide, both, or a water control during the growing season. We sampled plant communities in all plots near the end of the 2016-growing season.

We found that excluding mammals and birds increased the number of sown species by 30% with similar effects for edge and center plots. This was likely because of direct consumption of sown seeds or seedlings rather than through changes in non-sown species abundance because we found that the overall community compositions were not different. We also found that plots near the edges of our recently restored prairies had a 40% reduction in sown species richness compared to the middle. This was possibly caused by changes in composition of weedy species, which were quite different between edge and center. Finally, we found that the insecticide and molluscicide treatments did not impact sown species richness. These results suggest that management that suppresses weeds, especially near the edges of sites, and that reduces seed predation by mammals and birds could help increase native plant biodiversity during restoration.

Our PhD candidate, Miles Zhang, presented at the Evolution 2017 .

Talk type:
RegularTitle:
Testing the tri-trophic speciation patterns of parasitoid wasps in Peristenus pallipes complex (Hymenoptera: Braconidae)Abstract:
One of the driving forces of genetic divergence and ecological speciation in insects is host-associated differentiation (HAD), and while numerous examples of HAD have been found in various herbivorous insects, examples in the higher trophic levels such as parasitoids (sequential/cascading HAD) are rare. Euphorine braconids in the genus Peristenus are parasitoids of important agriculture pests such as Lygus bugs, however, species level identification for members within the P. pallipes complex are difficult due to inconsistent morphological characters and overlapping host records. Mitochondrial gene COI and Double Digest Restriction site associated DNA Sequencing (ddRADSeq) to two sympatric Peristenus species and their hosts collected from different locations, time, animal hosts, and plant hosts in order to determine population structures and potential driving forces of evolution. Preliminary results based on COI and SNPs suggests that one of the three host species (L. borealis) exhibit host fidelity, the parasitoids are largely separated based on temporal separation. P. mellipes emerges early and attacks 1st generation hosts, while P. howardi emerges later and mainly attacks 2nd generation hosts. This pattern could be the result of temporal niche partitioning, in order to avoid direct competition.Keyword 1:
SpeciationKeyword 2:
Host-parasiteKeyword 3:
InvertebratesTalk Recorded:
Yes