Asteroids are the rocky leftovers from the formation of the solar system. The largest asteroid, Ceres, and a few others, are dwarf planets, but the overwhelming majority are small, irregularly shaped objects that have been battered by collisions over the course of the last 4.5 billion years. Many are shards from collisional fragmentation of larger objects. Some are “rubble piles” of debris held together by their own weak gravity. When astronauts and robots explore these small objects, they will be interacting with a regolith, or collection of loose debris, on the surface that is only weakly bound to the surface. Small disturbances to the surface can kick up huge clouds of dust that can interfere with human exploration. We study the behavior of asteroid regolith in low gravity environments to learn more about the evolution of these and other small objects, such as small moons, as well as enable future exploration activities by manned and unmanned missions. 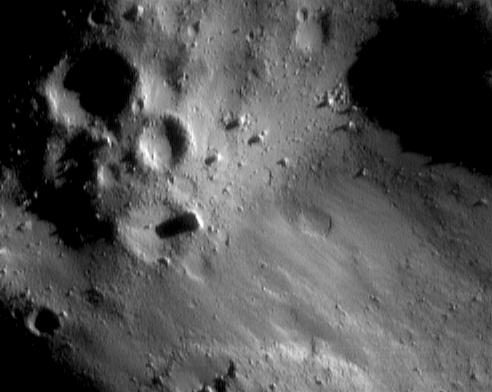 This image of the asteroid Eros was taken by the NEAR/Shoemaker spacecraft. It reveals a variety of surface features including relatively smooth plains, boulders of various sizes, craters, and smooth “pond” deposits of dust on the floors of some craters. The gravity on Eros is so small that a boulder weighing one ton on Earth would be only about a pound on Eros. The dust, pebbles and boulders on the surface make up the regolith of the asteroid. Credit: NASA/JPL/Johns Hopkins University/APL.

Experiments that focus on small bodies include: