As part of the Central Florida Intelligence Community Center for Academic Excellence’s (CF-ICCAE) programming for the upcoming year, we will be starting a Book Club in order to enrich student learning about intelligence using materials that, while interesting and even potentially exciting, may not fit into the general course curriculum.

We will begin the semester with in-person meetings, though depending on university regulations or other considerations, may switch to online meetings.

All students- graduate and undergraduate students of all majors- are welcome to attend the meetings, and we will have copies of each book available on a first-come, first-served (FCFS) basis. These can be picked up at the ICCAE office in Howard Phillips Hall, Room 314. This is for students who are interested in the club and/or the ICCAE but cannot make the full-time commitment, or may have specific interest or knowledge of the book for the next meeting. Note that receiving a copy of the books and not attending the meeting without prior notice may disqualify you from receiving further copies.

The next meeting is: Wednesday, October 27th at 4:00pm in Nicholson School of Communications, Room 102

The book we will be discussing is:

First In: An Insider’s Account of How the CIA Spearheaded the War on Terrorism in Afghanistan by Gary Schroen 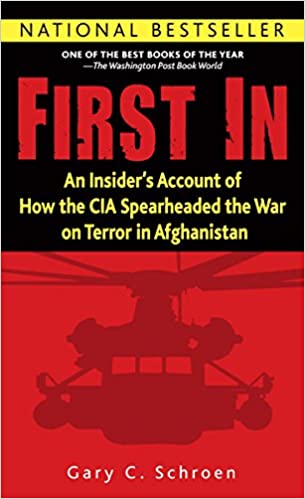 (From the jacket) While America held its breath in the days immediately following 9/11, a small but determined group of CIA agents covertly began to change history. This is the riveting first-person account of the treacherous top-secret mission inside Afghanistan to set the stage for the defeat of the Taliban. At fifty-nine, veteran CIA officer Gary Schroen was planning to retire- until he was drafted back for his most dangerous assignment: to lead the seven-man team called “Jawbreaker” deep into hostile territory and prepare the way for the American assault. The challenges to Jawbreaker’s progress were numerous, including the anti-Taliban Northern Alliance threatening to unravel, a Pakistani government eager to interfere, and a “rash and reckless” U.S. government that did not know the most effective way to attack.

If this book interests you and you can make the meeting, feel free to come down to Howard Phillips Hall, Room 314 to pick up a free copy (while supplies last!)