The NASA sponsored Center for Lunar and Asteroid Surface Science (CLASS) is one of nine domestic nodes of the NASA Solar System Exploration Research Virtual Institute (SSERVI) that together are tasked with addressing scientific questions that will facilitate the exploration of the Moon, near-Earth asteroids, the Martian moons Phobos and Deimos, and their near space environments. CLASS is anchored at the University of Central Florida (UCF) and the Florida Space Institute (FSI) but members of the CLASS network are distributed widely around the globe. To promote interchange between team members and support the training of new researchers, CLASS funds an annual summer research exchange program for graduate or undergraduate students to work with members of the CLASS network. This program is designed to allow CLASS team members to involve students in their research and to facilitate the interchange of students between CLASS organizations for the cross-feed of ideas, information, and techniques; to broaden the student’s research perspective; and to catalyze research in CLASS focus areas.

This program is open to all members of the CLASS network and awards are allocated following the issue of a request for proposals made during the spring academic semester. Non-conflicted CLASS team members evaluate, rank, and make recommendations to the CLASS Director, Prof. Dan Britt, who makes the final selections. The award may fund a summer stipend, expenses, and necessary travel, with the award amount dependent on the scope of the travel and research up to a total of $5,000 per student. It is expected that selected students will provide a final report detailing their scientific accomplishments during the exchange and that their research will result in the publication and presentation of scientific papers.

Chrissy Comfort and Akbar Whizin both used their awards to undertake research trips to Europe. Chrissy Comfort (Advisor: Prof. Humberto Campins, UCF) worked with Dr. Marco Delbo at the Observatoire de la Cote d’Azur, France on thermophysical modeling of the asteroids Bennu, 1999 JU3, and Phaethon. The purpose of her research was to create thermal maps of each asteroid in order to determine the regions on each body that would be the most prone to thermal cracking and hence regolith production. The focus on asteroids Bennu and 1999 JU3 was particularly timely because these bodies are the targets of NASA’s OSIRIS-Rex and JAXA’s Hayabusa 2 missions, respectively. Reflecting on her summer research experience, Chrissy stated that “the six weeks I spent in Nice, France at the Observatoire de la Cote d’Azur, were academically informative and culturally enriching”. 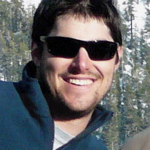 Institute für Geophysik und extraterrestrische Physik (TU Braunschweig) in Germany. His project entitled “Microgravity experiments of colliding dust aggregates and the formation of proto-planetesimals” consisted of performing and analyzing the results from microgravity collision experiments in order to characterize the velocity, mass, and size dependence on the outcomes of impacts involving millimeter-sized SiO2 dust aggregates (see Figure 1) as an analogue to understanding accretion in early planet formation. The ultimate goal of his research is to make an assessment on the validity of currently accepted solar system formation model’s predictions on the sticking and fragmentation thresholds of accreting aggregate clusters. Akbar presented the results from his investigation at the 2014 American Astronomical Society Division of Planetary Sciences Conference in Tuscon, Arizona.

Daniel Heißelmann (Advisor: Prof. Jürgen Blum, TU Braunschweig) was hosted by Prof. Josh Colwell to work in the UCF Center for Microgravity Research laboratory on a project to perform impact experiments into icy regolith and mixtures of icy and rocky granular material using the cryogenic drop setup. Impacts into regolith play an important role in the evolution of the surfaces of small Solar System bodies such as asteroids and comets. The response of a regolith surface to impacts is expected to be dependent on the composition of the regolith material and particularly on the fraction of icy components, since the van-der-Waals interaction between ice grains is much stronger in comparison to rocky material. Whereas several experimental studies have been carried out to probe the collisions of macroscopic bodies with beds of regolith at ambient temperatures, the focus of this investigation was to conduct impact experiments in a cryogenic vacuum environment below temperatures of 200K to avoid unwelcome effects, such as fluidization, changes of the ice particles’ properties, and sintering. 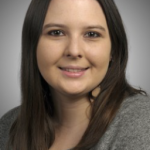 Puerto Rico to work with Drs. Ellen Howell and Michael Nolan, and Prof. Christopher Magri (U. Maine) on her project entitled “Understanding the Effects of Shape on Thermal Emission from NEAs”. The aim of her research was to study the compositional heterogeneity and regolith properties of 1627 Ivar using asteroid shape-modeling and thermophysicalmodeling software. Referring to the lasting benefits of this opportunity Jenna stated that: “This experience, made possible with CLASS funds, will continue to benefit me through my entire academic and professional life. It has had a major impact on my ability to perform the research for my thesis work as well as build contacts that will continue to influence me throughout my career. Being able to work in person with these collaborators advanced my work much quicker than corresponding by long distance and provided me with insight to future career possibilities in the field that I have chosen”.

The CLASS Student Summer Research Exchange awards for 2015 were made to: Jenna Jones (UCF), Zoe Landsman (UCF), and Charles Schambeau (UCF). All three graduate students intend to use these awards to fund their travel to the upcoming Thermal Models for Planetary Science II meeting (TherMoPS II), June 3–5, 2015, in Puerto de la Cruz (Tenerife), Spain that is co-sponsored by CLASS.

Jenna Jones’s (Advisor: Prof. Yan Fernandez, UCF) project entitled “Understanding the Effects of Shape on Thermal Emission from NEAs” is focused on generating thermal models that are based on realistic shape models derived from radar delay-Doppler imaging and visible light curves. Jenna will attend the TherMoPS II meeting to engage in discussions on thermal modeling and thermal infrared observations and to present recent results of thermal modeling using the new shape model she has derived of asteroid (1627) Ivar, which exhibits compositional and thermal heterogeneity on its surface.

Charles Schambeau’s (Advisor: Prof. Yan Fernandez, UCF) investigation is entitled “A New Analysis of Activity Drivers in the Enigmatic Comet 29P/Schwassmann-Wachmann 1”. His research interest is in modeling the thermal evolution of cometary nuclei and, in particular, focuses on the comet 29P/Schwassmann-Wachmann 1 (SW1). Charles will present his results on the development of a thermophysical model of the nucleus of SW1 at TherMoPS II.

We look forward to hearing about the research endeavors of our 2015 CLASS Student Summer Research Exchange awardees upon their return. ¡Buen viaje!