Skip to content
<< Return to Main Page
Back: Why Planetary Landing Effects Are Important

The Different Regimes of Plume/Soil Effects

There are different regimes in how rocket exhaust interacts with soil. It is wrong to think that the way one type of lander blows soil on one planet will be the same as another type of lander or on a different planet. It is like assuming you can drive a truck on water in Florida because you can drive one on a frozen lake in Canada. The water/truck interactions are in two different regimes because of the environments. Landing a rocket on Mars will be completely different than landing one on the Moon; they are in different regimes because of the environments.
Ultimately, all rocket exhaust effects are simply gas molecules pushing regolith grains, and then grains pushing other grains. But because there are trillions of grains involved in the event, coordinated behaviors can emerge. We can describe them, give them names, and study them to understand what will happen overall when a rocket lands on that planet. We can ask, when does one regime stop and another regime begin? That is like asking, under what conditions does the water melt so the truck sinks into the lake? The first step in understanding rocket exhaust plume effects is to discover, observe, and describe each of these various regimes. Then, we map out the conditions where each occurs and we quantify their behaviors.

The known regimes (so far) are the following (in the order they were discovered):

To this list, we can add some related behaviors:

Each regime will be described below.

Viscous erosion is the main regime during lunar landings. The rocket exhaust strikes the soil, creating a stagnation region (stationary gas) beneath a stand-off shockwave directly under the nozzle. This hot gas expands radially away from the stagnation region, expanding and accelerating as it travels outward into vacuum. As it blows along the surface, it picks up lunar soil particles including dust, sand, gravel, and rocks, accelerating them to high velocity. The astronauts noted the horizon looked hazy during the landings, so we know the dust blew fast enough to go completely over the horizon.

Our team members have accomplished the following research on the VE regime. 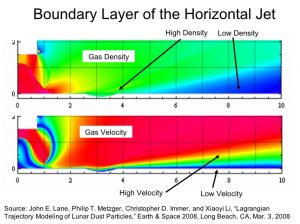 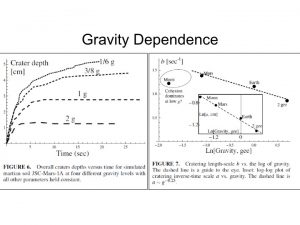 Diffused Gas Eruption was discovered as a regime by Ron Scott and Hon-Ko in 1968. The idea is that gas diffuses into the soil between the grains of sand and dust, building up pressure to match the pressure of the rocket exhaust on top of the soil. Then, it can erupt in two different ways. One way is that it diffuses laterally under the surface of the soil, building up pressure away from the centerline of the rocket. This creates a force imbalance that makes the soil erupt. The second way is that after the rocket engine shuts off, the sudden loss of pressure no longer balances the pressure under the surface, so soil erupts on the centerline of the engine toward the bottom of the spacecraft.

There is no visual evidence that this occurred in the Apollo landings. Metzger wrote software with high fidelity algorithms of gas diffusion including rarefied (Knudsen), transitional, and continuum (Darcy) diffusion as a function of regolith porosity and other parameters. The simulations showed that gas under a Lunar Module landing will permeate no more than a few centimeters, but that is the same depth over which the loose material is scoured away by VE, leaving more compacted material that resists both permeation and eruption. The pressure gradients are so gradual under the rocket engine in lunar vacuum that the very limited extent of lateral diffusion cannot set up large pressure gradients to cause toroidal eruption.

It also seems unlike DGE will be a significant factor in large human-class Mars landings, because deep cratering (BCF, etc.) will dominate.

The places where DGE may be important are on small bodies such as the Martian moons or asteroids. Chambers at UCF is performing experiments and developing computer simulations to investigate further. Preliminary results show that DGE will happen under the thrusters.

In related work, Metzger wrote software to simulate DGE under the OSIRIS-REx sampling mechanism, which uses gas to scour regolith into itself. New equations had to be developed because the large pressure differences would cause supersonic flow in the subsurface where inertia of the gas cannot be neglected Metzger’s analysis shows that the gas will be driven deep into the subsurface of the asteroid and, depending on the regolith’s porosity under the surface, could blow out a significantly large quantity at the spacecraft. (Metzger, 2014a)

In geotechnical engineering, the soil’s ability to hold up a building is its bearing capacity. If too much load is placed on the soil, it will result in bearing capacity failure. Similarly, if a rocket exhaust pushes down with more stagnation pressure than the soil’s bearing capacity, it will push the soil down into a depression, i.e., a crater. This concept was originally studied by Alexander et al. (1966). Researchers on our team discovered several crucial corrections to that theory.

First, the research in Alexander et al. included firing rockets into sand then measuring the resulting crater. What we found is that the resulting crater is just a residual crater that formed from the collapse of the initial crater due to the rocket exhaust, and there is no similarity in their shapes. The residual crater is typically a cone at the angle of repose of the sand. The initial crater formed by BCF is actually a long, narrow cylinder. We found this by performing cratering experiments against a polycarbonate viewing window so we could record the crater with high-speed cameras while the rocket is firing. (Metzger et al., 2009a)

Second, our team discovered a crucial error in the theory by Alexander, at al. The theory assumed that the rocket exhaust diffuses into the soil causing it to loosen, while at the same time the stagnation pressure pushes down on the surface to form the crater. However, if the pressure under the surface were equilibrated with the pressure above the surface, then there would be no surface force to push the soil down. As we explored this, we discovered a new regime, Diffusion Driven Shearing (discussed below). BCF occurs when the jet pushes the soil down much faster than the pressures can equilibrate. DDS occurs when the subsurface pressure develops faster than the soil can be pushed down. (Metzger et al., 2009c)

Third, we found that the depth of these initial craters are far deeper than predicted by the Alexander et al. theory, sometimes by an order of magnitude. The Alexander et al. theory apparently leaves out some of the physics, and it assumes a shearing geometry that is more resistive to subsurface shear than what actually occurs in the soil. More work is needed to develop an accurate theory of the subsurface deformations. (Metzger et al., 2009c)

Fourth, we found that the properties of the soil actually have very little effect on the depth of the initial crater, at least for the cases in our experiments. For one test, we used Mars soil simulant in two very different porosities and mechanical strengths. We found that the rocket exhaust created almost exactly the same size crater in each case. The results suggests the crater depth is a function of the jet length, which is a property of the propulsion system and the ambient atmosphere, not a function of the soil. The crater grew about twice as fast in the case with weaker soil, but it was still just a couple seconds in each case. (Immer and Metzger, 2010)

We ran simulations of Martian rocket plumes into craters that were much deeper than would really form, because the excessive depth only fills with stagnant pressure and does not affect the top of the simulation in steady state. This allows us to determine the length of a Martian plume in a crater, so we can determine how deep the crater will actually grow. We find that for human-class Mars missions, the crater can grow between 6 and 9 m deep. In reality, additional physics will probably prevent the crater from growing so deep, such as side-walls collapsing, sucked in by the Bernoulli effect of the coaxial jet. However, we can safely conclude that human-class Mars landers will create very deep holes that can be mission-threatening unless controlled. (Metzger and Li, 2018)

Our team’s research found that deep cratering is different if the soil is very porous, allowing gas pressure to build up under the surface faster than the pressure pushes it down into a crater, than if it is relatively impermeable so most of the gas pressure stays at the surface. In the latter case, what results is BCF. The former case we called Diffusion-Driven Shearing because the force is not applied at the surface of the soil anymore, but instead is distributed throughout the bulk of the soil. It is the result of the drag force of the permeating gas, pulling the soil everywhere and setting up elastic forces in the soil that exceed shear strength so the soil deforms plastically. In the BCF case, the sand moves perpendicularly away from the tip of the crater, but in the DDS case it moves tangentially around the tip. More generally, the soil has intermediate permeability so the gas is not fully diffused into the subsurface. Then, the force is applied partly at the surface due to stagnation pressure, and partly throughout the subsurface due to diffusing drag force. In those more general cases, the sand grains move diagonally away from the tip of the crater.

Our team observed the various cases from BCF through DDS, and we developed the theory of the DDS regime and performed computer simulations of it. (Metzger et al., 2009a)

In studying the Mars Phoenix Lander plume effects, Anita Sengupta (NASA/JPL) and our team member Manish Mehta (NASA/MSFC) discovered a new regime in plume/soil interactions. The Phoenix propulsion system used pulsed engines, and in the scaled experiments the pulsing caused repeated shock waves to propagate into and through the subsurface of the soil. This provided kinetic energy as well as pressure gradients into the subsurface, causing the soil to lose shear strength so it was easily swept away by the plume, forming a deep crater. They developed a theory of DGEE based on a suite of experiments. (Mehta et al., 2011)

Our team members are listed in bold.

Lane, John E., and Philip T. Metzger (2012), “Ballistics Model for Particles on a Horizontal Plane in a Vacuum Propelled by a Vertically Impinging Gas Jet,” Particulate Science and Technology30 (2), 196-208.

Mehta, Manish. “Plume-Surface Interactions due to Spacecraft Landings and The Discovery of Water on Mars.” PhD dissertation, University of Michigan, 2010.

Morris, A. B., D. B. Goldstein, P. L. Varghese, and L. M. Trafton. “Modeling the interaction between a rocket plume, scoured regolith, and a plume deflection fence.” In Earth and Space 2012: Engineering, Science, Construction, and Operations in Challenging Environments, pp. 189-198. 2012.

Morris, Aaron B., David B. Goldstein, Philip L. Varghese, and Laurence M. Trafton. “Approach for modeling rocket plume impingement and dust dispersal on the moon.” Journal of Spacecraft and Rockets 52, no. 2 (2015): 362-374.

NASA, NASA’s Recommendations to Space-Faring Entities: How to Protect and Preserve the Historic and Scientific Value of U.S. Government Lunar Artifacts, https://www.nasa.gov/sites/default/files/617743main_NASA-USG_LUNAR_HISTORIC_SITES_RevA-508.pdf

Next: Geological Considerations for Plume Effects
Back: Why Planetary Landing Plume Effects Are Important
<< Return to Main Page