Skip to content
<< Return to Main Page
Back: Protecting the Apollo Sites

Some or all of these may need to be performed. Robotics are being developed for these tasks.

The KSC Swamp Works (members of our team) developed a low-mass, high-strength lunar bulldozer blade along with a QuickAttach mechanism so the NASA JSC Chariot Rover could autonomously and quickly pick up and pre-load the attachment of the blade then immediately work with it. This blade has been used in Desert-RATS field tests.

The KSC Swamp Works developed robotic technology for sintering lunar regolith and mounted it on a rover for field testing.

The KSC Swamp Works has developed a large robotic arm with attachment that 3D prints structures from lunar soil simulant. This type of system could be used to 3D print walls around a landing site as blast barriers. 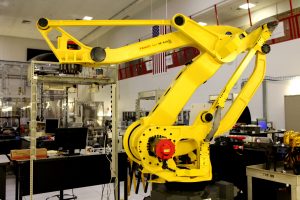 Members of CLASS participate in the annual NASA Robotic Mining Competition, including Rob Mueller, its co-founder and head judge. Through this competition over 450 designs for lunar and Martian robots have been evaluated. We have collected and analyzed data on the robots to answer questions such as, why do some robot designs avoid getting stuck in the lunar-like regolith, which other robots have difficulty driving? We have discovered that no single parameter of the robot correlates to successful driving. It is not until we analyzed the combinations of seven or more parameters that we began to see correlations. This has enabled our team members to develop world-leading expertise in designing robots to work in lunar regolith.

The tasks were evaluated by Rob Mueller and Bob King for the number of metric tons of regolith that must be moved to accomplish each, shown in the bar graph below (Space Resources Roundtable, SRR-IX, Oct. 2007)

Next: For Students and Educators
Back: Protecting the Apollo Sites
<< Return to Main Page