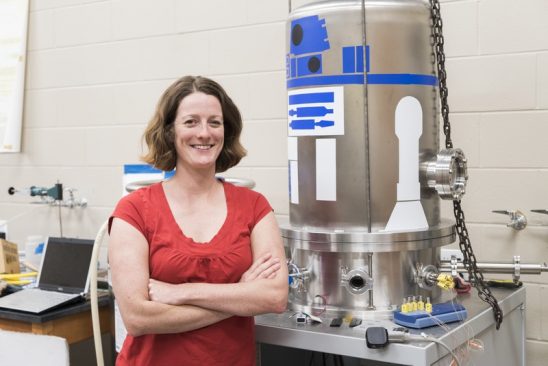 Her work is helping scientists who have been puzzled for decades understand some mechanisms of dust charging and transport, which will be critical to sending spacecraft to other planets.

The Solar System Exploration Research Virtual Institute will present Dove with the award this summer. SSERVI is dedicated to addressing basic and applied scientific questions that are necessary to understanding the moon, near-Earth asteroids, the Martian moons Phobos and Deimos, and the space environments near them.

“I’m humbled and honored,” Dove said. “I’m most proud of the opportunity I’ve had to bring together basic science research and its application to space exploration. We need to know how dust moves across a planet and why. It is critical to exploration science…for human or robotic missions.”

The award is especially meaningful to Dove because she said Niebur is someone she admired.

“She was really pretty awesome,” Dove said. “I’m honored because it is given to someone who is early on in their career and who has contributed both to research and to mentoring.”

Niebur, an astrophysicist from Texas, started her career straight out of graduate school as an

intern in NASA’s Office of Space Science at headquarters. She went on to become the Discovery Program Scientists in 2003.

During her five-year service at NASA headquarters she co-founded the Early Career Fellowships and Workshops for Planetary Scientists held at annual meetings of the American Astronomical Society’s Division for Planetary Science and the Lunar and Planetary Science Conference. She was a strong advocate for women in space science and held many leadership positions in scientific associations. Mentoring and inspiring the next generation of scientists was one of her priorities. Niebur died from cancer in 2012.

“We look forward to future scientific discoveries from Dr. Dove,” said Yvonne Pendleton, director of SSERVI. “Her outstanding research efforts are vital to the ambitious activities we hope to achieve in exploring the solar system with robots and humans.”

Dove strives to expose young people, especially girls, to physics and potential careers in physics. Her work started before arriving at UCF in 2012 as a post-doctoral research associate. When Dove was still a graduate student at the University of Colorado at Boulder, she co-created the Lunar and Small Bodies Graduate Conference to give graduate students an opportunity to present in front of their peers in a less stressful environment than some bigger conferences in the field. The program continues today and she is still involved.

At UCF, Dove dedicates much of her time to working with undergraduate students on research into microgravity and how dust behaves in space. She also presents to various groups on campus and has started conducting outreach in Orlando to encourage young girls to pursue science, technology, engineering and mathematics careers.

In addition to teaching classes, Dove is working on six research projects, five funded through NASA and one through the National Science Foundation. She is also deputy principal investigator of CLASS, NASA’s Center for Lunar and Asteroid Surface Science based at UCF. The center provides critical research in areas NASA has identified as key to future robotic and human space-exploration missions.

Dove’s eyes light up when she begins to describe her work and she can usually explain it to those who aren’t astrophysicists. That’s probably one reason she is cohost of Walkabout the Galaxy, an astronomy-focused podcast for the general public. UCF Professor Joshua Colwell started the podcasts and serves as co-host, as does physics associate lecturer Jim Cooney. The 20-35-minute episodes are released two or three times a month.