Assessing Body Condition of Manatees: Can you really be too fat?

Body fat in marine mammals serves several roles: as a source of buoyancy, as an energy store, and as an insulator.  It is also used as an indicator of overall 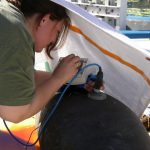 body condition with high stores indicating good condition. Successful rehabilitation and reintroduction of rescued and released West Indian manatees is dependent upon our ability to assess their body condition. PEBL scientists are currently evaluating some commonly applied methods that are used for body condition assessment and exploring new approaches.
We have determined that the two different ultrasound instruments, Scanoprobe and Tringa, that are in common use, gave depth readings (mm) that were not significantly different from each other when used on blubber samples collected from dead manatees.  However, both gave readings that were significantly different from actual ruler measurements collected on the same samples.  These deviations from ruler measurements were typically underestimates of the actual depth and we speculated that these “inaccuracies” might be associated with changes in fat content resulting in density differences.

Out of the 19 samples analyzed for lipid content, 15 had a large decrease in lipid content within the blubber layer.  In one example, the outer portion of the 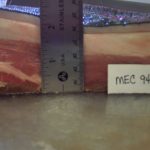 blubber ranged from 85 to 91% fat, whereas the deeper portion of the blubber was only 50% lipid. This unexpected compositional change, corresponded with the depth measured using the Tringa on all 15 occasions and with depth readings from the Scanoprobe on 9 of the 15 samples.  This suggests that the ultrasound unit is identifying the depth where composition changes and not the depth of the blubber.  The primary advantage of the Tringa over the Scanoprobe is that it produces an image which can be interpreted to distinguish both these qualitative (% lipid) differences in blubber composition as well as actual quantitative (depth) differences.  This requires some training by the operator, but the ability to measure both blubber depth and composition will give us a much clearer understanding of the body condition and health of these endangered animals.