So much vegetation but what should I eat?

It is well know that manatees feed on aquatic vegetation, including seagrasses and some species of exotic aquatic plants. They have also 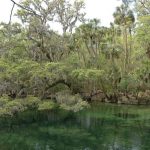 been observed to occasionally feed on terrestrial grasses and overhanging vegetation such as mangroves.  Historically, the only ways to determine feeding habits has been to watch manatees eat, analyze the feces of living manatees, or by stomach content analysis of recently deceased animals.  These methods all provide information on recent feeding events, however, none is an efficient method by which to look at the manatees’ feeding habits over a long period of time, and it is this level of information that is important if one is trying to determine critical habitats.

Previous studies on a variety of species have shown that the use of naturally occurring stable isotopes of carbon and nitrogen is an effective tool in the study of feeding habits.  This technique has demonstrated that the isotope composition of the food is reflected in the body of the consumer.  Essentially this is similar to the adage – “you are what you eat”.  By 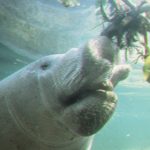 analyzing the amounts of these isotopes in a small skin sample, we can gain insights into what types of food were consumed over the past month.  Carbon isotope ratios differ between C3, C4, or CAM photosynthetic plants, and between fresh, brackish, and marine systems.  The application of this approach to manatee skin will thereby allow us to examine the recent feeding habits of manatees and gain insight into whether they were using fresh, brackish, or marine habitats.

Manatees in different parts of Florida eat very different mixes of vegetation.  In some areas, sea grasses are consumed almost exclusively, while in other areas manatees eat almost all fresh water plants.  The ability to examine both historical and current feeding preferences of manatees could provide invaluable information to those agencies responsible for defining critical habitat and help identify food resources that are most in need of protection and management.

We were the first to calculate stable isotope turnover rate in the skin of any marine mammal.  Stable carbon and nitrogen isotope ratios were examined over a period of more than one year in the epidermis of rescued Florida manatees that were transitioning from a diet of aquatic forage to terrestrial forage (lettuce).  Mean half-life for 13C turnover was about 53 days for skin from manatees rescued from coastal regions and mean half-life for 15N turnover was about 70 days for skin from manatees rescued from coastal and riverine regions, respectively.  These slow turnover rates, mean that carbon and nitrogen stable isotope analysis using manatee epidermis is useful in summarizing average dietary intake over a long period of time but not for assessing recent diet.  In addition to turnover rate, a diet-tissue discrimination value of 2.7‰ for 13C was calculated for long-term captive manatees on a lettuce diet.  Determining both turnover rate and diet-tissue discrimination is essential in order to accurately interpret stable isotope data.

These results were subsequently used to interpret carbon and nitrogen stable isotope data in epidermal samples collected from free-ranging manatees in Florida, Belize, and Puerto Rico.  Regional differences in carbon and nitrogen isotope signatures in manatee skin were consistent with signatures in plant samples collected in those regions.  Signatures in the skin of manatees sampled in Belize and Puerto Rico were indicative of a diet composed mainly of seagrasses, whereas those of Florida manatees exhibited greater variation suggesting possible diets of primarily freshwater, brackish, or marine vegetation.