The western Alaskan Steller sea lion population has continuously declined in numbers over the past three decades.  Nutritional stress, the leading, but unconfirmed, hypothesis for the decline, may occur as a result of changes in prey quality or quantity resulting in an energy imbalance.  Maintaining a stable body temperature in the aquatic environment can be a challenge to juvenile sea lions who must balance high energy expenditures associated with foraging with the need to allocate energy to growth. Young sea lions, with their immature physiology and inexperience, have the additional expense of needing to allocate energy for growth while still dealing with a thermally stressful aquatic environment.  This challenge would be magnified under conditions of nutritional stress, where daily energetic demands are not being met by energy intake.  Under these conditions, juvenile sea lions foraging would have to tap into their energy reserves, thereby reducing insulation and increasing costs of thermoregulation.  This continued energy deficit could contribute to reduced body condition until energy balance could no longer be maintained.   With the immense environmental and physiological pressures acting on juvenile age-classes, declines in prey resources would be particularly detrimental to survival.  The goal of this study was to examine the metabolic and thermoregulatory capabilities of juvenile Steller sea lions in order to better understand how changing prey resources indirectly impact juvenile age classes.

This potential problem was examined by first measuring resting metabolic rate in water to assess the degree to which body condition influences thermoregulatory costs in captive juvenile Steller sea lions.  Animals entered a swim flume where water temperature and flow 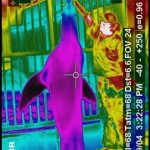 Data collected from captive Steller sea lions suggested that changes in both body mass and body composition influence the thermoregulatory capabilities of smaller sea lions both in stationary and flowing water.  Serial thermal images taken of sea lions after emergence from the water show vasoconstriction of the flippers compared to the body trunk to help minimize heat loss.  Despite this ability to vasoconstrict, animals in poor body condition had a decreased ability to tolerate colder water temperatures; suggesting that decreased insulation as a result of decreased in prey availability may limit survival in younger sea lions. 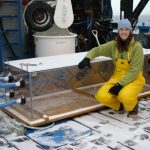 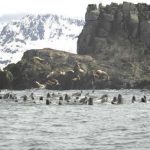 metabolic measurements.  Captive trials had indicated that reduced body condition had a noticeable impact on RMR in smaller sea lions at colder water temperatures and suggested that young animals just learning to forage in the wild may have difficulty maintaining thermal balance.  Data collected from wild sea lions showed no evidence of differences in RMR between western and eastern AK populations, suggesting that some other mechanism may be influencing current declines. If reductions in prey availability (i.e., nutritional stress) were impacting western Alaskan populations, a reduction in energetic expenditures would be expected in these animals in order to cope.