The goal of the current study was to assess seasonal variability of proximate composition and the stable isotope and fatty acid signatures of each of the prey species that have been recognized as being important to bottlenose dolphins in the IRL.  The IRL was the ideal location for a study of the interactions of a top predator and its environment for several reasons: 1) the IRL represents a unique closed environment that supports a year-round resident population of bottlenose dolphins; 2) the preferred prey species for the IRL dolphin population have been previously identified; 3) prey distribution and behavior have been extensively studied aiding in the interpretation of the interaction between predator and prey; and 4) the IRL is one of the most biologically diverse estuaries in North America having been designated as an “Estuary of National Significance” by the National Estuary Program.

Results of our investigation indicate that several of the potential prey species for IRL bottlenose dolphins exhibit significant seasonal changes in their gross proximate composition (specifically gross lipid and water content), their stable isotopic signature (implying they shift seasonally feeding habits) and their fatty acid signatures.  Water content of fish ranged from a low value of 62.5 ± 2.0% in pinfish (Lagodon rhomboides) collected during October-November, to a high of 79.9 ± 0.1% in oyster toadfish (Opsanus tau) collected in December-January.  Lipid content also varied considerably both seasonally and between species from as low as 1% to as high as 28%, with corresponding changes in overall energy density and therefore potentially substantial ramifications for dolphin foraging preferences.

As part of the larger study, we also investigated the degree of resolution of spatial variation that is possible when using stable isotope and fatty acid signature analysis over relatively short distances. Spotted seatrout, pinfish and white mullet were collected over a 4 week period at sites 30 km apart in two distinct biogeographic regions of the IRL. Fish were analyzed for stable isotope and fatty acid composition. All three species were significantly different from each other in both isotopic and fatty acid signatures but when examined at a grosser scale, each species was still individually recognizable. The ability to discern fine-scale differences in potential prey allows for the possibility of better resolution of dolphin feeding habits and hence a better understanding of both habitat utilization and health impacts. 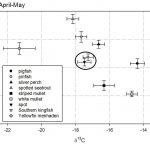 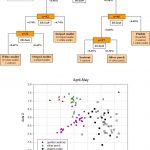 These data emphasize the need to develop a comprehensive library of prey species characteristics in order to ultimately be able to understand predator-prey relationships and trophic structure in the IRL. The current results demonstrate the potential analytical power of combined isotope and fatty acid information and give us deeper insight into ultimately assessing the feeding ecology of the resident bottlenose dolphin population.