Graham Worthy is the Hubbs Professor of Marine Mammalogy and Provost’s Distinguished Professor of Biology in the Department of Biology at the University of Central Florida.  Graham was born in Bournemouth England but grew up in Toronto, Ontario, Canada. He received his B.Sc. (1979), M.Sc. (1982) and Ph.D. (1986), the latter degrees working with Dr. David Lavigne, from the University of Guelph on thermoregulation in young phocid seals.  Subsequently he went to the University of California at Santa Cruz for his postdoctoral training with Dr. Dan Costa. After spending 11 years as a faculty member in the Department of Marine Biology at Texas A&M University at Galveston and serving as the State Coordinator and President of the Texas Marine Mammal Stranding Network, Worthy was recruited in 2001 to come to the University of Central Florida as a Provosts Distinguished Professor of Biology and the first Hubbs Professor of Marine Mammalogy. His Physiological Ecology and Bioenergetics Research Lab is currently working on projects on pinnipeds, cetaceans, sirenians around the world.

At UCF, Worthy teaches undergraduate and graduate courses in Comparative Animal Physiology and Mammalogy. He lives in Oviedo Florida with his wife, Tammy, and his 8-year old daughter, Kelsey, along with 3 dogs, 1 cat, 3 guinea pigs, and a pair of parakeets.

GRADUATE STUDENT AT THE UNIVERSITY OF GUELPH, CANADA

Between 1979 and 1986, I was a graduate student under Dr. David Lavigne in the Department of Zoology at the University of Guelph in Guelph, Ontario Canada.  My M.Sc. and Ph.D. research centered around how harp and grey seal pups survive the immediate post-weaning period.  These projects examined the energy stores that were used during the fasting period, insulation and thermal exchange with the environment, and an examination of the thermoneutral zones in air and in water. 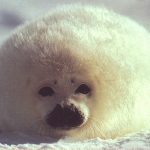 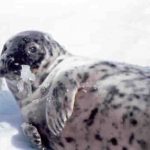 Both of these species are thought to fast for approximately 6-8 weeks after they are weaned during which time they develop their swimming and hunting skills.  The major difference between these species is that harp seals fast in the water, at temperatures close to 0°C, while grey seals generally fast on land.  This trait of undergoing a post-weaning fast is common in many phocid seals.  There has been some controversy about how young seals cope with this period of fasting and my research goal was to examine these two species and determine how each species coped with fasting either on land or in the water.  Seals were held under captive conditions in Guelph, where they were naturally fasted either on land or in the water.  Body compositions were measured over the duration of the fast and metabolic rates of all seals were measured both in air and in water.  When fasting, these seals must draw on a variety of energy reserves to sustain life.  These reserves potentially include blubber (fat), muscle (protein), and, in 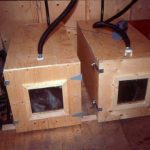 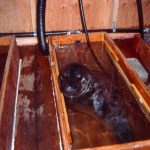 cies, diffuse fat stores around the viscera.  The overall conclusion of my research was that the pattern of energy utilization used by different seal species reflects species-specific adaptations to different breeding habitats.  Regardless of whether harp seals fasted in air or in water, they initially drew from internal energy reserves (visceral fat and muscle) and spared the blubber layer for as long as possible.  This meant that they were able to retain their insulation as long as possible.  This would be critical if the animal was fasting in ice-cold water.  Grey seals, and other species that fast on land, immediately began to utilize blubber reserves, since insulation is not as much of an issue.

During the summer of 1985, Robert Stewart, Barbara Stewart, Stuart Innes, Andrew Read, Birgit Braun, and I undertook a project that examined the metabolism of the harbor porpoise, Phocoena phocoena.  This species is the smallest, oceanic cetacean and is commonly found in waters as far north as Iceland and Alaska and as far south as central California and the Carolinas.  In the Bay of Fundy, Canada, fishermen regularly use weirs to catch herring and mackerel.  On occasion, they also incidentally (and non-lethally) capture harbor porpoises.  This project was designed to take advantage of these entrapped porpoises by 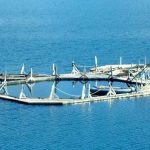 holding them for a few days in some abandoned salmon pens.  The ability to hold these animals in captivity for a short time allowed us to set up and train them to use an indirect calorimeter and to thereby measure their metabolic rates.  Animals were initially trained to use a breathing dome over a period of 2 days and then their oxygen consumption rates were measured over a period of 2-3 days before the porpoises were released near their original capture locations.  Water temperatures during the measurement period averaged . 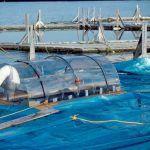 14°C The results of this study suggested that: 1) small cetaceans can be quickly accustomed to using this type of measurement system and that this approach has the potential for application to both short- and long-term captive animals, and 2) these actively swimming, immature harbor porpoise had metabolic rates that were within the range of values that would have been predicted for any young active mammal.

Between 1987 and 1990, I was a postdoctoral research associate in Dan Costa’s research program at the Long Marine Lab of the University of California, Santa Cruz.  This was an exciting period and I was able 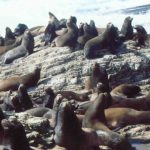 to be involved in research on a variety of marine mammals including northern fur seals, California sea lions, northern elephant seals, and bottlenose dolphins.  I learned a great deal from Dan about new analytical techniques, how to manage a large research program, how to supervise graduate students, and how to teach undergraduate students.  The specific project that I was brought in to work on was funded by the Office of Naval Research and involved examining the energetics and body condition of California sea lions and bottlenose dolphins.  Through this project I was introduced for the first time to both field and 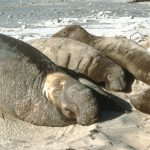 lab work on an otariid and a cetacean species.  I was also able to get actively involved in the on-going research program with northern elephant seals.  Santa Cruz was a bustling center for marine mammal research at that time with Dan Costa, Michael Castellini, Randy Wells, Ken Norris, Leo Ortiz, Burney LeBoeuf, Robert Gisiner, and Ron Schusterman all having active research programs underway.  There was also an amazing cadre of graduate students in the program, all of which meant that there was never a shortage of projects to work on. 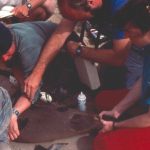 I oversaw the collection of body condition data from California sea lions that were either captive held at LML or wild at both Año Nuevo Island and San Nicolas Island.  This study involved the seasonal assessment of body fat stores using tritiated water, Bioelectrical Impedance Analysis (BIA) and ultrasound.  We also undertook lab studies of the thermoneutral zone of sea lions, seasonal changes in body mass, and their assimilation efficiencies on different diets.  Concurrently, we were undertaking similar body condition assessments of bottlenose dolphins in Sarasota Bay FL, and assessing seasonal changes in blubber depth, water flux, and food intake of captive dolphins held in Santa Cruz.  Later, with NSF funding, we were able to examine the seasonal habitat utilization of Sarasota dolphins while concurrently measuring their field metabolic rates using doubly-labeled water

In another field application of doubly-labeled water, I and colleagues undertook a study on the molt energetics of adult female northern elephant seals.  I also had the opportunity to assist on a number of graduate student projects focusing on elephant seals including projects examining their lactation and fasting energetics, body composition, basal metabolism, their thermoneutral zone, and the heat increment of feeding.

While in Santa Cruz, I was also introduced to the concept of marine mammal stranding networks.  I got involved with the recovery of dead and live stranded pinnipeds and cetaceans along the coast of Santa Cruz County, and for a short while helped oversee the rehabilitation of a live-stranded pygmy sperm whale.  I had no idea at the time how much of an effect these activities were to have on my future career.

In 1990, I relocated to Texas A&M University at Galveston to assume a faculty position in the Department of Marine Biology.  Within a few months of my arrival I was asked to become a member of the Board of Directors of the Texas Marine Mammal Stranding

Network (TMMSN).  At the same meeting I was elected to be its President and simultaneously became State Director, taking over the reins of an organization that had been led by Dr. Raymond Tarpley for over 8 years.  I held these two positions until shortly before I left Texas in 2001.  The TMMSN was a well established network of dedicated volunteers when I arrived, but I wanted it to play more of a role in public education and eventually we were forced, by circumstances beyond our control, to become very active in marine mammal rehabilitation.  During my time at the helm we had to cope with three major die-off events of bottlenose dolphins and a long series of live strandings.  Many of those live-stranded animals were successfully rehabilitated and released.  Released animals were generally satellite-tracked with devices that transmitted information about movement patterns and diving habits, leading to invaluable new information on the biology of cetaceans in the northern Gulf of Mexico.

Research activities on TMMSN projects were undertaken by several graduate students in my own program, by Dr. Dan Cowan and his research program at UTMB, as well as researchersfrom many other institutions across the country.  In addition to satellite tracking, research projects were also completed on physiological ecology, feeding habits, pathology, cranial and post-cranial morphology, genetics, immunology, parasitology, contaminants, and medical care.

During the years at Texas A&M, the Physiological Ecology and Bioenergetics Lab grew and developed with a cadre of amazing graduate students and postdocs. In 2001, Graham was recruited by the University of Central Florida and Hubbs-SeaWorld Research Institute to relocate his research program to central Florida.