Although manatees have occasionally been reported as far as north as Rhode Island and as far west as Texas during the summer months, their physiology

restricts them to warmer sub-tropical to tropical water temperatures during the cooler winter months.  During the winter, manatees generally migrate south to warmer latitudes, but a significant number of individuals may remain north of their historical range, relying on a network of artificial, industrial warm-water effluents and natural, warm-water refugia to survive colder water temperatures.   With the potential threat of power plant deregulation and the loss of related critical warm-water effluents, the need to identify and qualify additional sources of warm-water refugia not dependent upon industrial outflows has become increasingly important.

Brevard County is home to a substantial proportion of the states’ manatee population with winter synoptic counts indicating that several hundred manatees are using numerous aggregation sites, with the highest proportion of manatees being counted at two power plants in the northern part of the county. Smaller aggregations have also been documented at several smaller less well known sites.  While most of the state’s primary warm-water sites have been researched and well-documented, some primary sites and several secondary sites still remain unidentified or are at best, poorly documented particularly in Brevard County. 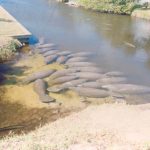 refugia;  2) to establish daily patterns of  manatee use; 3) to define  the physical and chemical parameters of each site in a manner comparable to studies of other known secondary warm-water sites; 4) to rank these sites in order of importance with respect to usage during critically cold times;  5) to  predict  the sustainability of these sites over time;  and 6) to evaluate the current protection (if any) and the possible need for further protection or enhancement of these potentially critical sites.  This research is being undertaken by Ann Spellman, Ph.D. candidate in PEBL.