Each year between May and early August, male and female California sea lions aggregate at the breeding colonies to breed and give birth. Males establish territories and pregnant females give birth to a single pup in May or June in the territories. After nursing the pup for 5 to 8 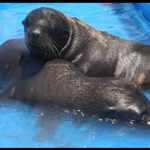 days, the female leaves the pup for her first feeding trip. She feeds for 2 to 5 days and then returns to nurse the pup for 1 to 2 days. During the mother’s absence, the pup fasts. The female alternates feeding trips with nursing visits until the pup is weaned. Females nurse their pups for 6 to 11 months. Breeding occurs 30 days after the female has given birth and occurs in July and early August.

For the first two months of nursing a new pup, a mother sea lion’s milk contains 32% fat, about 9% protein, and 0.6% lactose (milk sugar). By the fourth month of nursing, the fat content may increase to 44%. The protein and lactose remain relatively constant.  Weaning in California sea lions occurs after almost nine months of nursing. During the nursing period, the pup starts playing with fish and eventually becomes proficient at hunting by the time of weaning. Unlike true seals, sea lion pups are processing both solid food and milk at the same time in their development. Whether this transition period is vital to their digestive development, or is a by-product of a sea lion mother that is limited in her ability to provide rich milk is unanswered? Although the seals do not have this transition period of a combined milk and fish diet, they do have a transition period of fasting that delays the process of solid food digestion. Are these two events related, in that they allow the body to develop and mature enough to maximize assimilation efficiency?

The goal of most zoological facilities is to provide the best possible care for their animals, and one way of doing that is to recreate a natural 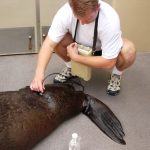 environment for the animal. However, zoological settings are limited in terms of size and capabilities, and compromises must be made. With marine mammal exhibits, this often means the exclusion of other marine life such as fish, squid or crustaceans, the natural prey of these animals. This is a potential drawback during the weaning process when the young are unable to experiment with live prey and eventually wean from their parent naturally. In most captive facilities, pinniped pups are manually separated from their mother, and often fed a diet of whole fish at the time of enforced weaning. For seals, this sudden transition may recreate what happens in the wild; however, sea lions are usually naturally weaned after fish is already a major part of their diet. The potential impact of this artificial weaning process on pups is unknown. Does the digestive system of a sea lion require nine months to fully develop and assimilate whole fish effectively enough to meet its nutritional requirements? And therefore, does weaning at an earlier age have an adverse effect on growth and development? The nutritional stress hypothesis states that any interruption in quality, quantity, or availability of food can lead to poor nutrition and result in negative physiological and/or behavioral development.

This study examined if weaning age has an effect on the neonate’s ability to process solid food. By comparing body composition and blood 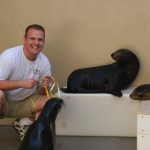 chemistry changes in six, eight, and ten month old California sea lion pups during the weaning process and the period immediately thereafter, we examined if there is a relationship between the time female sea lions naturally leave their pups (approximately 9 months of age), and their ability to be nutritionally independent.  If no relationship exists between digestive maturity and weaning age, then all pups should assimilate solid fish equally with no significant difference in body mass/composition seen between age brackets.  In contrast, if a relationship does exist, sea lions weaned younger than 8 months of age may experience a greater decrease in percentage body mass/composition than sea lions weaned older. This study is on-going and is part of the MS research of Brandon Davis.