Feeding Ecology and Habitat Utilization of Dolphins in South Africa

The Indo-Pacific humpback dolphin is a small cetacean that inhabits coastal waters off of Asia, Eastern and Southern Africa, and Australia.

Because humpback dolphins are inshore inhabitants, they are vulnerable to impacts from human activities within these areas such as pollution, by-catch in fishing nets, intentional take, degradation of habitat, and potential impacts from developing ecotourism.  In addition, increasing competition for resources between dolphins and humans is likely as these inshore waters are a significant area for rapidly developing commercial and recreational fisheries.   Biological and ecological studies of the humpbacked dolphin are lacking, and they are currently listed as being data deficient by IUCN.  Very little is known about their feeding habits, with only a few studies done on stomach content analysis and some observations of feeding activity in the wild.   By exploring the feeding ecology of the humpback dolphin, we can learn more about predator-prey relationships, food web dynamics, competition for prey by other delphinids, and be able to identify important fish stocks and feeding sites throughout their range. 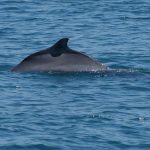 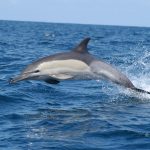 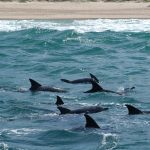 In addition to humpback dolphins, the coastal waters off of South Africa are also home to both bottlenose dolphins and common dolphins.While these species have had more attention paid to their feeding ecology, it is still not clear as to what specific prey items they are taking in the regions of overlapping habitat with humpback dolphins.  By looking closer at their feeding ecology in these areas of interest, we will gain a better understanding of the partitioning of resources between these three species and be able to distinguish prey species that are of importance to these dolphins.  The close proximity of these animals to industrialized coastlines and the potential competition for resources with each other and the commercial fishing industry and ecotourism, make the study of the feeding ecology of humpback, bottlenose, and common dolphins an important and needed venture.      The goal of this study is to assess the feeding ecology and habitat utilization of humpback, bottlenose, and common dolphins found in the coastal waters of Knysna and Plettenberg Bay, off the central southern coast of South Africa. Using a combination of stable isotope and fatty acid signature analysis, we will assess the prey preferences of each of the three dolphin species and determine any dietary overlap.  Additionally we will be able to determine any potential seasonal changes in diet, and examine whether sex or reproductive status might influence foraging techniques.   An interspecific comparison of diet and trophic levels between humpback, bottlenose, and common dolphins with overlapping home ranges will also be undertaken to better understand how resources are utilized amongst these three predators.  Through this study, we hope to not only gain insight into the feeding ecology of these dolphins, but also to expand our knowledge base for the humpback dolphin in order to make appropriate conservation decisions for this species both locally and throughout its range.

This project has been undertaken in partnership with the Centre for Dolphin Studies and the Natal Sharks Board in South Africa and will have a widespread conservation impact, even beyond the borders of South Africa.  This project represents the first attempt to investigate, in any detail, the feeding ecology and habitat utilization of the three primary species of coastal dolphins off of South Africa.  This basic understanding of the ecology of these three species is critical if we are to truly understand the potential changes that may occur in this system as a result of increased coastal development, ecotourism, and commercial fisheries.  Critical feeding grounds and primary prey stocks could be identified as a result of this study and appropriate conservation actions will become easier to define.  This is part of the doctoral research of Nicole Browning.