The Indian River Lagoon (IRL) is a highly productive environment, rich with a wide variety of flora and fauna including sea grasses, fish, and marine mammals.  It is also a unique system because it is a relatively small, closed geographic area that is home to many species year-round.  Because of these features, the environment remains relatively constant, making the IRL an excellent location for studying feeding ecology of both predators and prey.  The purpose of this project is to examine both the composition of bottlenose dolphin blubber and the primary prey species that dolphins might consume.  By using a combination of stable isotopes and fatty acid signatures, we hope to create a picture of the food web dynamics occurring in the IRL throughout the year, and apply this knowledge to other natural systems around the world. 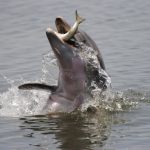 Florida including Mosquito Lagoon, Indian River, Banana River and the St. Lucie Estuary.  There are five inlets and one lock (Cape Canaveral lock) connecting the IRL to the Atlantic Ocean.  The estuary ranges in width from a few meters to 9 km and averages in depth at approximately 1.5 m with maximum depths at around 4 m.  In 1990 the United States Environmental Protection Agency designated the IRL as an Estuary of National Significance to help preserve one of the most biodiverse estuaries in North America.  Pressures from human population growth, overfishing, habitat degradation and inflows of pollutants, nutrients and freshwater made it necessary to put conservation efforts into force.  It is estimated that there are approximately 300 resident dolphins in the IRL that rarely, if ever, leave the lagoon.  Bottlenose dolphins in the IRL show strong site fidelity to specific areas in either northern or southern portions of the system and a number of recent studies have noted significant health issues related to these distribution patterns, with northern IRL dolphins exhibiting significantly greater health issues than southern IRL animals.

We have determined that prey eaten by IRL dolphins are individually recognizable using their fatty acid signatures.  Preliminary analysis of 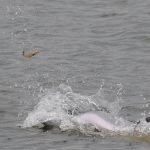 over 2000 individual fish and almost 150 dolphin blubber samples from the Indian River Lagoon suggests that this approach is going to be a very valuable tool. An examination of the isotopic signatures and fatty acid signatures of fourteen species of fish shows that we can individually identify these.  This is a critical prerequisite to interpreting the diet of the dolphins.  Early data also indicates that male and female dolphins are likely feeding on different prey, although it is still too early for us to say precisely what they are eating, and there is also evidence of seasonal and annual shifts in dolphin feeding habits.  All of these early results are supported by behavioral observations of the dolphins. 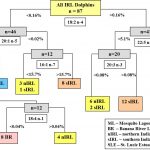 Collectively our isotope and fatty acid data indicate that IRL dolphins in different sub-regions are either feeding on different prey, or that the relative proportions of those prey in their respective diets differ.  The conclusions, based on the fatty acid data, are consistent with the independent conclusions of our isotope analysis and collectively demonstrate that IRL bottlenose dolphins are flexible in their dietary choices and that they quickly respond to changes in the availability, and possibly energetic/nutritional quality, of the resident icthyofauna. These analyses suggests that there is great potential in using dolphin blubber/skin to monitor long and short term ecological changes that may be occurring in the IRL.  Clearly the IRL is undergoing dramatic changes.  The results presented in the present report reinforce the need for considering both spatial and temporal scales when assessing ecosystem processes from a trophic perspective.