When is even Florida not warm enough?

Cold-related deaths have been documented in West Indian manatees on many occasions over the past 25 years.  Initially the cause of such large numbers of 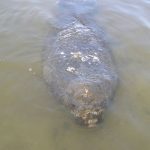 deaths during the winter was unclear, so carcasses were categorized as “undetermined cause of death”.  However, starting in the mid-1980s, descriptions of cold-related deaths began to appear in the records.  There have been at least four major cold events since 1977 that have resulted in large numbers of deaths.  They include the winters of 1976-77, 1980-81, 1983-84, and most recently 1989-90.  In each of these events, animals died rapidly due to hypothermia.  Cold-related deaths of manatees rank as one of the leading causes of death attributed to natural (non-human related) causes.  The only other natural cause that is responsible for large numbers of deaths is exposure to red tide.  Death from exposure to cold is an unfortunate by-product of the fact that these animals are living at the northern most extreme of their geographic range.  These extreme cold fronts can also potentially debilitate, but not immediately kill, manatees that later die from other non-related circumstances.

Death from cold exposure is a tragic by-product of the fact that Florida manatees live at the northern-most extreme of their range and that even in Florida there are occasional cold periods.  Sadly, studies indicate that juvenile manatees appear to be the most frequently affected by hypothermia.  These young animals are apparently not experienced enough to realize that they need to move to warm water refugia.  This response is learned from their mothers who introduce them to these areas when they experience cold fronts during the long period of maternal care.  In contrast, more experienced adults are well aware of the location of warm water refugia, are better able to monitor temperature cues, and have sufficient fat to carry them through periods when they do not feed.  Dependant calves are not as affected by the cold because they are still supported by an experienced adult.

Previous data suggested that adult manatees possess metabolic rates that are only 25-30% of predicted values, resulting in a lack of cold tolerance.  The immediate result of having a low metabolic rate and a high thermal conductance, or poor insulation, is an inability to deal with cold conditions.  This results in manatees congregating in specific areas during cold weather.  This response to cold weather conditions is a learned response.  Mothers introduce their offspring to warm water refugia during the prolonged period of maternal dependence common to the species. 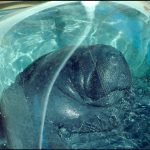 We collect metabolic rate measurements by holding individual captive animals in a temperature‑controlled tank.  The water in this tank gets recirculated through a chilling and heating unit which is housed in our Mobile Energetics Lab (MEL).  The surface of the holding tank is covered with a plexiglas dome, except for a breathing space of approximately 8″ in height. Oxygen uptake is measured by continually pulling fresh air through this covered volume and analyzing the oxygen content of the exiting air.  Manatees can be measured in water temperatures ranging from approximately 50° to 95°F.

Our preliminary data show that manatees which weigh more than 750 lb increase their metabolism in water temperatures below 68°F and some animals doubled their metabolic output when temperatures dipped to 55°F.  This suggests that these animals are capable of dealing with cold, for at least some period of time.  This is consistent with what is observed in the wild.  The critical question is how long can this be maintained.  This will be addressed in phase II of this research.  Results for small manatees (<750 lb) are very different.  These younger animals are very susceptible to cold conditions because they are apparently incapable of increasing their metabolic rate at low temperatures.  Even at temperatures as low as 55°F, these animal showed no indication of any increase in metabolic heat production.  This would very quickly result in hypothermia and death if left even for a few hours.  This apparent inability to increase their metabolic rate in response to cold temperatures is puzzling since in most species this response is independent of age.

The next phase of this research project will extend studies of the metabolic capabilities by determining metabolic expenditure during a prolonged exposure to a temperature below the lower critical temperature.  These data will be of critical importance in the development of release criteria, and the selection of release sites, as well as understanding the possible ramifications of the potential loss of thermal refugia due to habitat destruction or plant closures.