Dolphins are long-lived, maintain complex social relationships, and occur in a variety of habitats ranging from off-shore to estuaries.  Many 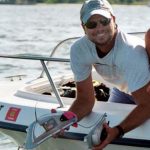 estuarine communities of bottlenose dolphins in Florida are well studied and known to consist of multi-generational residents. Mothers pass along skills and behaviors to offspring, including foraging traits and home ranges.  As an apex predator in the marine ecosystem, the bottlenose dolphin is a sentinel species for a broad measure of ecosystem integrity and viability.  They are entirely marine animals and bio-accumulate nutrients, trace minerals, and pollutants from their prey that appear in their tissues and are linked to health status. Climate and weather patterns may influence dolphin distribution patterns and movements. In addition, human activities such as boating, shoreline development, ecotourism, and sport fishing play a role in modifying dolphin foraging ecology and habitat use in coastal areas.

Our understanding of how dolphins use estuarine habitats has typically been via coarse scale studies.  Monitoring individuals on a finer scale allows a better view of movement patterns through the habitat, and of activities that occur during night time. By using instrumented dorsal tags, we are able to follow and record the fine-scale activity of bottlenose dolphins in several locations, including Sarasota Bay and the 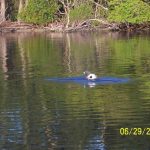 Indian River Lagoon.  During ongoing health assessment studies in these areas, animals are caught and briefly restrained for examinations.  Prior to release, we attach a non-invasive instrumented tag on the dolphin’s dorsal fin, allowing us to collect fine-scale data for periods of up to 2 days.  Continuous radio tracking from a boat gives locations and allows visual observations, while archival data loggers on the tag record activities, including feeding. This yields a detailed activity budget for the animal. To date, we have learned that dolphin movements appear to be strongly linked to tide changes and prey presence.  We have seen dolphins make long transits between patches of habitat during the tracks, which shows that they make extensive use of the available area.  Some animals spent considerable time in ocean inlets and the intracoastal channels, while others made long swims up rivers into lower salinity waters.  Continuous recording of the animal’s swimming speed allows us to address bioenergetics questions.

Dolphins’ prey often becomes more active after sunset, which might be an especially important feeding time.  Visual and auditory observations, along with stomach temperature measurements, revealed that dolphins spent a considerable amount of time foraging at night. 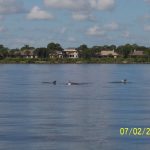 Underwater acoustic recordings indicated soniferous fish presence.  Dolphins travel between habitats by steady transit swimming and will occasionally engage in slow rhythmic swimming with relaxed respirations suggestive of sleep, usually during tranquil conditions when few boats are around.  By understanding their use of the habitat and the relationship between foraging and physical parameters that influence their movements, it will be possible to predict prime habitat locations worth protecting.  We will expand this study to investigate the effects of disturbance on habitat use, and look closely at interactions with sport fishing in Northwest Florida.