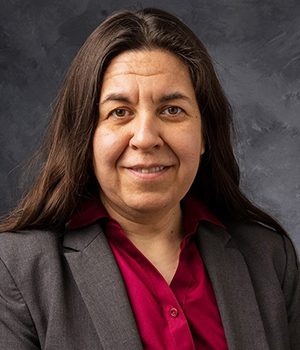 Maggy Tomova is the Dean of the UCF College of Sciences. She earned her Bachelor’s degree in Mathematics and Biochemistry at California Lutheran University, and her Ph.D. in Mathematics at the University of California, Santa Barbara. She first joined the faculty of the Department of Mathematics at the University of Iowa as a Visiting Assistant Professor in 2005.  After a brief stint as an Evans instructor at Rice University, she returned as a tenure-track Assistant Professor in 2008. In 2017, she became the Department Executive Officer (Chair) of the Department of Mathematics, and was named Associate Dean for the Natural, Mathematical and Social Sciences in the College of Liberal Arts and Sciences (CLAS) in December 2019.

Her primary research interest is in low dimensional topology and knot theory, as well as in the applications of topological results to the life sciences. She has published prolifically and is in demand nationally as a presenter at universities and conferences. Her research has been supported largely by National Science Foundation grants, including a CAREER grant in 2011. CLAS named her Dean’s Scholar in 2012.

Dean Tomova’s accomplishments as a teacher extend beyond her excellence in undergraduate teaching. She has successfully advised eight graduate students through the completion of their doctorate degrees. As Director of the UI’s Summer Math Institute from 2011-2015 she helped guide promising high school students from low-income families toward college-level mathematics, and she was Assistant Director and Research Mentor for an NSF-funded REU (Research Experience for Undergraduates) for students from marginalized groups at California State University Channel Islands.