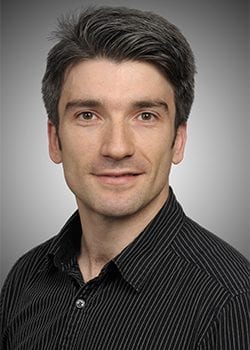 Dr. Vaida received his B.Sc. in Physics from West University of Timişoara. He obtained an ERASMUS scholarship to perform research at Free University of Berlin during his master degree program. After receiving the MS. in Physics, Dr. Vaida obtained a DAAD fellowship for doctoral studies at the Institute of Surface Chemistry and Catalysis at Ulm University, where he earned his PhD degree. Subsequently, he carried out research as a postdoctoral research scholar in the Chemistry Department at University of California, Berkeley. He began as Assistant Professor at University of Central Florida in September 2016.

Dr. Vaida uses a state-of-the-art femtosecond laser system in conjunction with a high harmonics generation source and a monochromator to produce femtosecond laser pulses in the extreme ultraviolet spectral range. These laser pulses are employed to track the charge carrier dynamics in novel 2D nanostructured materials with time resolution, surface sensitivity, and element specificity. Moreover, pump-probe femtosecond laser mass spectrometry technique in conjunction with extreme ultraviolet soft ionization at the surface is used to study the ultrafast dynamics of molecules attached at solid surfaces such as bond breaking and bond making, with time‑, mass-, and energy-resolution. The main goal of this research is to fully monitor and understand the electron and molecular dynamics at the surface of various nanostructured materials that can be used to construct highly efficient photocatalytic and photovoltaic devices.