My research group is interested in the fabrication of nanoscale electrical and optical devices consisting of low dimensional chemical nanostructures such as nanoparticles, nanowires,  nanotubes, and molecules and investigation of their electronic transport properties. Nanoscience and nanotechnology deals with the study, development, and application of materials, devices, and systems with dimensions in the 1–100 nm range. The physical, chemical, and biological properties of materials at the nanoscale differ in fundamental and valuable ways from the properties of bulk matter. The many novel phenomena observed at the nanoscale are primarily the consequence of the appearance of quantum effects that begin to play an important role at length scales approaching a few nanometers. Our research effort is directed toward creating and characterizing improved materials, devices, and systems at the nanoscale that exploit these new properties. Specific areas of research interest includes: (i) Controlled assembly of carbon nanotubes and their device properties, (ii) Beyond Moors Law: Single electron transistors (iii) Chemically functionalized graphene: fundamentals and applications and (iv) Novel techniques for fabricating organic electronic and photovoltaic devices. For more detail, please see our group website http://physics.ucf.edu/~khondaker/research.htm 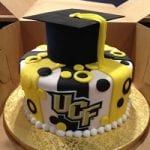 Introducing Our New COS Ph.D. Graduates

May 8, 2015 the College of Sciences celebrated 17 new Ph.D’s at a special graduation reception. The event was held in the afternoon in the Physical…