Dr. Hawthorne is a tenured, associate professor of geographic information systems (GIS) in the department of sociology. He is a public scholar broadly trained in human geography with expertise in community geography and Geographic Information Systems, social and environmental inequalities, critical GIS, Participatory GIS (PGIS), mixed methods, STEAM education, Belize and citizen science. He also serves as graduate director in the department of sociology (beginning August 8, 2020). He joined UCF to co-lead a new College of Sciences GIS Cluster Initiative in August 2015. He has received over $4.72 million in funding including seven awards from the U.S. National Science Foundation. He has published over 20 peer-reviewed articles in high-impact journals spanning multiple disciplines with numerous student co-authors.

He holds two associate editorships in Journal of Geography and International Journal of Applied Geospatial Research. He currently serves as Principal Investigator of a NSF Research Experiences for Undergraduates (REU) and Research Experiences for Teachers (RET) Site in Orlando and Belize. This work includes students and K-12 teachers in research focused on social and environmental inequalities relates to flooding and litter in Belize. The work is in collaboration with Dr. Hannah Torres (current Co-PI of George Mason University) and Dr. Christy C. Visaggi (former Co-PI of Georgia State University). The REU/RET Site has received over $800,000 on funding from NSF since 2015 and has included over 70% of its participants from underrepresented groups in STEAM in an effort to broaden participation in science.

Inspired by work with students and community partners, in 2015, he founded an internationally-recognized research group called Citizen Science GIS. The group’s goal is to connect scientists and society through the use of geospatial technologies to make science more accessible and responsive to community concerns. Simply put, the work aims to work with communities rather than in communities. Citizen Science GIS was awarded a 2017 Esri Special Achievement in GIS Award (one of four such awards for higher education teams worldwide) demonstrating the appeal and significance of their public scholarship to broader society.

Along with UCF support and that of several public partners and Lynx, a local bus company, the team is building the nation’s first GeoBus™, a mobile STEAM research and education lab on a repurposed 40-foot city bus that provides geospatial technology learning experiences to K-12 youth and teachers in Florida. GeoBus extends the team’s current STEAM education outreach efforts in their Maps, Apps, and Drones Tour which has inspired over 9,00 youth in Central Florida schools since 2017.

Dr. Hawthorne also serves as Co-PI on a $1,600,000 NSF Coupled Natural-Human Systems research grant that examines coastal restoration in the Indian River Lagoon, Florida. He co-leads the GIS and sense of place portions of the award. He also serves as Co-PI on $1.26 million NSF grant led by Dr. Emmett Duffy (PI) and the Smithsonian’s MarineGeo program. The UCF team led by Hawthorne and post-doc Dr. Bo Yang work with students and partners to drone map seagrass beds at Smithsonian field sites along the western coast of North America from San Diego to Alaska. 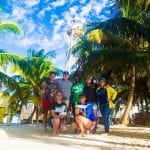 Impactful community research in rural Belize will continue for another three years thanks to renewed funding from the National Science Foundation. The $465,000 grant supports… 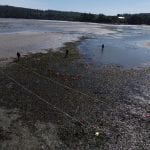 Critical work mapping seagrass beds on the Pacific West Coast continues uninterrupted this fall thanks to innovative thinking from the Citizen Science GIS team. The… 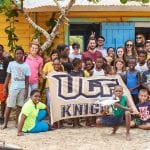 Students Head To Belize For GIS Mapping and Teaching

BY TIM HAWTHORNE, Ph.D. Opening up one’s worldview. Exploring foreign landscapes. Interacting with new cultures. Engaging in research with communities. These are just some…